Plastic production relies on oil and gas, yet reducing output has not been put forward as a response to the energy crisis. Until now. A new report says this is the moment for bold action.

That our collective relationship with plastic is unhealthy, has been well documented. It’s a relationship we have come to take for granted and from which we struggle to move on despite its often toxic nature.

But it’s also one that is little understood.

Findings released Tuesday by the global Break Free From Plastic movement and the non-government Center for International Environmental Law (CIEL) show the dynamics at play and how using less plastic would leave more energy to heat homes.

In their study ‘Winter is coming: plastic has to go’, CIEL and Break Free From Plastic, which counts more than 1,900 NGOs among its members, say scaling back on single-use plastics and packaging is a concrete step decision-makers could take to contribute to the overall effort to reduce fossil fuel consumption.

It is, the authors write, time for the EU to “confront the petro-elephant in the room: plastics.”

The link between gas, oil and plastic

Derived from fossil fuels, produced in energy-intensive processes, and whether dumped, incinerated or recycled after use, plastics go hand-in-hand with emissions at every stage of their life.  Yet their production in Europe increased from 0.35 to 55 million tons between 1950 and 2020, and plastic is the EU petrochemical industry’s largest market.

According to Tuesday’s report, in 2020 nearly 15% of overall EU gas and 14% of oil consumption was used to make petrochemicals. The majority of that went towards the manufacture of plastics. The findings note, for example, that as much gas was used to make plastics, as was consumed overall by the Netherlands.

Equally, the countries that consume the most oil and gas to produce plastics — Belgium, Germany, Spain, France, Italy, the Netherlands, and Poland — are also responsible for 77% of all EU plastic packaging waste.

Against that backdrop and in light of the scramble to source gas from outside Russia, Delphine Levi Alvares, European Coordinator of Break Free From Plastic, says it is a serious oversight not to include the sector in the EU’s Save Gas for a Safe Winter proposal aimed at securing heat and power across the bloc in the coming months.

“While families and small businesses are facing skyrocketing energy bills, the petrochemicals industry is wasting scarce resources to produce unnecessary single-use plastic, fueling the EU energy crisis,” she said on publication of the study.

Andy Gheorghiu, a climate campaigner who was involved in the report, says the fact that people are being told to shower cold and heat less while “we continue to feed this monster called the petrochemical and plastic industry with large amounts of oil and gas” reveals a serious disconnect between the expectations on individuals and industry.

But he also stresses how tackling single-use plastics at this juncture offers a genuine opportunity to “address three crises at once: the plastic crisis, the climate crisis and the energy crisis.” 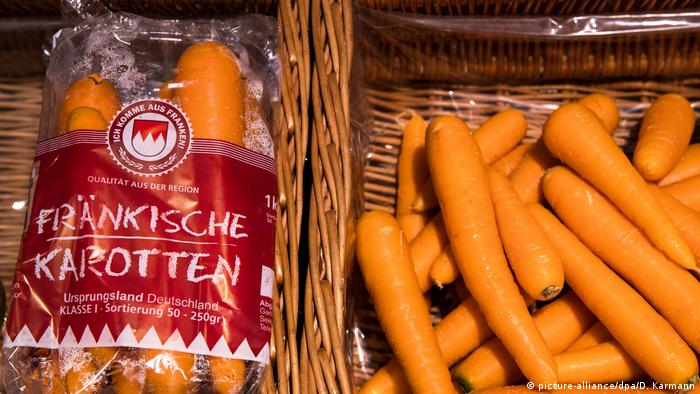 The authors are calling for a ban on unnecessary packaging

The report lays out a raft of recommendations to that end. They include EU states putting a decreasing cap on overall packaging allowed to enter its markets, a limit to the volume of plastics produced globally and a halt to the construction of new fossil fuel infrastructure including petrochemical facilities.

The authors also call for ambitious and binding prevention and reuse targets of 50% by 2030 and 80% by 2040 and bans on unnecessary packaging such as single-serving sachets and the wrapping of fruit and vegetables.

But Gheorghiu goes a step further.

“I personally would say now is the time for a lockdown of the plastic industry in Europe.”

In other words, he would like to see an immediate and complete stop of virgin plastic production. At least for the winter. He also advocates for a thorough European-level analysis based on the findings of the report.

“It should include expanding our research and going through the petrochemical industry and listing what kind of products they are producing to see if they are essential or not.”

As things stand any such lockdown doesn’t appear to be in the offing.

In a statement to DW, press spokesman Adalbert Jahnz said the European Commission was, however, “implementing a comprehensive plan for a transition towards a regenerative economy,” which would address “the use of all resources, including fossil fuels for plastics through numerous actions such as legislating.”

Though Europe has taken some steps on plastic, including its 2018 strategy, subsequent ban on certain single-use items, and current role in working towards an internationally binding agreement on ending plastic pollution, the report notes that the bloc has yet to take any steps to directly stop the production of new plastic.

Gheorghiu hopes that besides highlighting the correlations between the plastic, climate and energy crises, the new research will “kick-start a debate around virgin plastic production and the need to further reduce single-use packaging in Europe.”

He is optimistic that the prospect of the coming winter means the findings will resonate with both policy-makers and the general public.