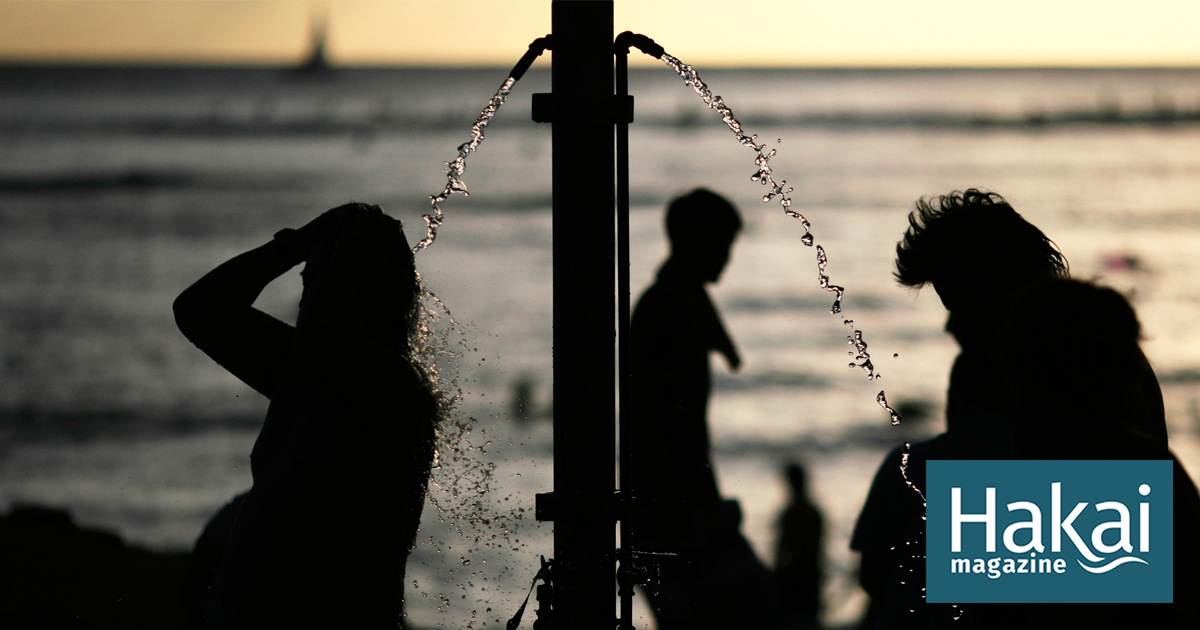 At 49 Black Sand Beach, in Honoka‘ope Bay, Hawai‘i, a strange, moat-ringed mound sits in the middle of the beach. This tiny island, made of sand piled about half a meter or so high, was built by a beach shower. Every time a beachgoer steps under the shower to rinse off, water cascades from its base, carving gullies into the sand.

But while the shower’s obvious effect on the beach is mostly benign, it belies a more subtle, and potentially more destructive, consequence.

As new research shows, the water that flows from the shower into the nearby surf is laden with a toxic mix of contaminants—including UV filters, microplastics, and parabens. Scientists who’ve tested the water say that this beach shower, like the thousands of others dotted along coastlines around the world, is a source of pollution that sends chemicals flowing into the ocean at concentrations high enough to cause serious damage to marine life.

The problem, says Craig Downs, an ecotoxicologist at Haereticus Environmental Laboratory in Virginia who coauthored the new paper, is that most beach showers are not plumbed into the local wastewater system. Instead, the runoff spills out onto the land and into the ocean.

Because the showers are point sources of pollution, Downs and his colleagues argue that their owners and operators—which are mainly municipalities—could be sued for violating the US Clean Water Act.

Downs, however, would like to see the situation solved more proactively. “We don’t really want to get rid of the showers,” he says. Instead, “what we can do is apply technologies, or legislation, to end [the showers] being a source of pollution.”

There are technologies that will work, though.

One possibility for addressing the high levels of contaminants in beach showers, says Ranil Wickramasinghe, a chemical engineer at the University of Arkansas who wasn’t involved in the research, is to use a membrane bioreactor. This all-in-one wastewater treatment system uses a thermoplastic or ceramic membrane to catch contaminants and allows clean water to flow through. Microbes ingest the contaminants, rendering them harmless. But there’s a couple of catches: setup costs are high and the microbes must be matched to each contaminant.

Another option, says Carlos Martinez-Huitle, an environmental electrochemist at Brazil’s Federal University of Rio Grande do Norte, who also wasn’t involved in the research, is using advanced oxidation processes (AOP). There are two modes which could be put to use at the showers, he says: direct AOP, where electricity is applied to the AOP cell, enabling its inner surface material to break pollutants down; or indirect AOP, where the current pulls pollutants to one end, while oxidizers form at the other. The oxidizers then transform the pollutants into benign compounds. Municipalities could collect shower wastewater, filter out the sand, and then apply an AOP device to clear pollutants before discharging the water into the ocean, suggests Martinez-Huitle.

AOP is a power-hungry technology, though, so the key is to pair it with a source of renewable energy. In their lab, Martinez-Huitle and his team have developed a system that uses AOP to clean industrial wastewater with electricity supplied by solar panels or wind turbines.

But even the most cost-effective wastewater treatment technology will test meager municipal budgets. Agreeing which one to use, and then implementing it, will also take time.

In the meantime, the researchers are hoping that consumer education, wider use of ultraviolet protection factor (UPF) clothing, and regulations, like Maui’s incoming chemical sunscreen ban, will help stem the flow of pollutants into the environment.

For Downs, now that we know beach showers can be potent sources of pollution that can threaten marine life, the next steps are obvious. “If you can identify a point source of pollution,” Downs says, “then you have the … responsibility to mitigate that pollutant.”