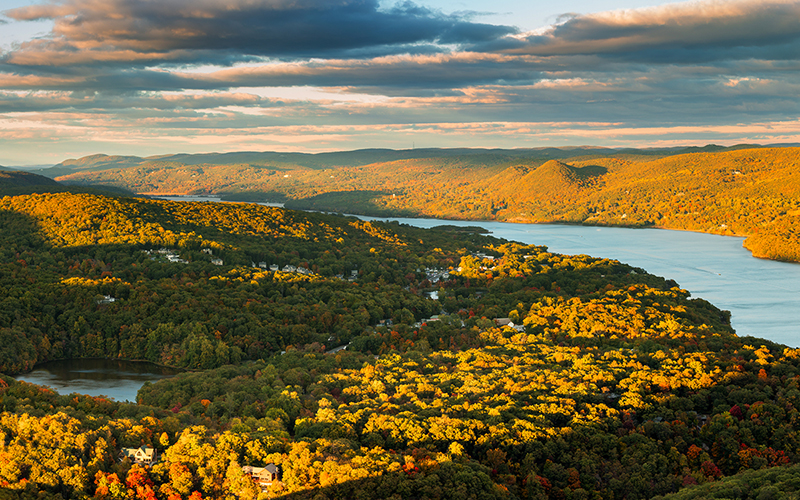 Robinson Township is a small community of about 15,000 people located west of Pittsburgh, and, like much of western Pennsylvania, it sits atop one of the largest deposits of shale gas in the United States. In 2012, the state assembly passed Act 13, which made it easier for fossil fuel companies to extract gas—in part by limiting the ability of local governments to determine where drilling could take place.

Maya K. van Rossum, the CEO of Delaware Riverkeeper Network, was alarmed. “By virtue of this law, you could have an operating drilling-and-fracking well pad in the heart of a residential community, located as close as 300 feet from people’s homes,” she says. Determined to make a change, Robinson Township petitioned the Commonwealth of Pennsylvania to strike down the zoning law and other provisions of Act 13. “Seven municipalities joined us in our legal action because their authority had been taken from them.”

To make their case, the coalition turned to a long-neglected provision in the commonwealth’s constitution. In 1971, Pennsylvania voters ratified an amendment that established an explicit right to “clean air, pure water, and to the preservation of the natural, scenic, historic, and esthetic values of the environment.” Not only were sections of Act 13 a bad deal, argued Robinson Township, but they were unconstitutional.

That argument was convincing for four out of the seven judges on the Commonwealth Court, which ruled that two of Act 13’s provisions violated the plaintiffs’ constitutional rights. “I really thought about the power of what we had accomplished,” van Rossum says. “It was a success that we likely would not have been able to accomplish any other way.”

The victory inspired her to start a movement to get “green amendments” into every state constitution, and soon after, she joined up with environmental groups who were working toward that goal in neighboring New York State. Their effort was supported by groups including the state chapter of the AFL-CIO, the League of Women Voters, the NYC Environmental Justice Alliance, and conservation organizations throughout the state.

On November 2, New York voters overwhelmingly approved Proposal 2, a ballot measure to establish a right to a healthy environment. More than two-thirds of New Yorkers—a total of 68.9 percent of voters—agreed to add a one-sentence line to the state constitution that reads, “Each person shall have a right to clean air and water, and a healthful environment.”

With the measure’s passage, New York becomes the sixth state to enshrine a right to a clean environment in law (the others, aside from Pennsylvania, are Montana, Illinois, Massachusetts, and Hawai’i). How exactly the amendment will influence environmental protection in New York going forward is unclear. But advocates say the ballot measure’s success is an important step in protecting New York communities from pollution.

The concepts expressed in the new constitutional amendment have been circulating among environmental groups for several decades, says Peter Iwanowicz, executive director of Environmental Advocates NY. Per the state’s Bill of Rights, New Yorkers have the right to worker’s compensation, freedom of worship, and even the right to bet on horse races and play bingo. It only makes sense that they would have a right to breathe clean air and drink clean water, Iwanowicz says. But “in the eyes of New York State law, there was no such right.”

Iwanowicz and other advocates first worked with legislators in Albany to introduce a bill to establish a right to a healthy environment in 2017. It quickly passed through the state assembly. But the Republican senate leadership refused to pick it up, Iwanowicz says, “knowing full well that if they brought this up for a vote, it would pass—and pass with bipartisan support.”

On November 2, New York voters overwhelmingly approved Proposal 2, a ballot measure to establish a right to a healthy environment.

But advocates persisted and managed to pass legislation in 2019 and 2021 to put the issue before New York voters. (Under the New York law, a proposed constitutional amendment has to pass the legislature in two concurrent sessions before it goes to a referendum.) The measure received overwhelming support—passing the assembly 124 to 25 and the senate 48 to 14—but opposition persisted. Opponents argued that the proposed constitutional amendment was too vague and would create unnecessary legal battles. “I’m all for clean air and clean water. Who isn’t?” Daniel G. Stec, a Republican member of the senate, told the Adirondack Daily Enterprise in January. “But in the face of ambiguity you will have distrust, you will have lawsuits, you will have costs, and I’m trying to avoid that.”

The amendment’s supporters and law professors told Sierra that expansive, aspirational language is common in declarations of universal rights. For example, courts are still debating the limits and nuances of the right to free speech, says Iwanowicz. New York’s new constitutional amendment will similarly be shaped on a case-by-case basis.

“It will be up to the courts to determine what the amendment means,” says Michael Gerrard, a professor of law at Columbia University. “The New York courts could find that it has great force, or not much, or something in between. We don’t know yet.” The particulars will be worked out in the coming years as lawyers invoke the text in their arguments and judges decide how it can be used, Gerrard says.

Pennsylvania provides a case study of how this might play out. Shortly after Pennsylvania’s Environmental Rights Amendment became part of the commonwealth’s constitution, lawyers put it to the test. “What almost immediately happened is that it got into the courts, and the courts took out a bit of the punch,” says Grant MacIntyre, a law professor at the University of Pittsburgh. One case in 1973 involved a private landowner who wanted to build a viewing tower next to Gettysburg National Cemetery, which one observer, writing in The New York Times, called “a new low in historical tastelessness.” The Commonwealth of Pennsylvania sued on the grounds that the tower would violate Pennsylvanians’ new environmental rights. But the argument failed to convince the judge, and another case the same year established a new legal test that effectively neutered the amendment.

“In the early cases, the courts were really, really nervous that [the amendment] could shut down economic development,” says John Dernbach, a law professor at Widener University in Chester, Pennsylvania. As a result, the amendment went mostly unused for several decades while Dernbach and others tried to get the courts to take it seriously. The Robinson Township case marked something of a turning point, and environmental lawyers have gradually moved the jurisprudence forward case-by-case since then.

New York’s green amendment was inspired by cases like the water crisis in Hoosick Falls, Iwanowicz says. In 2015, tests of the drinking water there showed high levels of PFOA—a chemical associated with various health risks including cancer—from a nearby plastic-manufacturing operation. Residents in Hoosick Falls ultimately reached a settlement with companies including Honeywell and 3M earlier this year.

“It’s hard to know how an environmental amendment would have impacted poor decisions that were made in the past,” Iwanowicz says. But “the next time somebody proposes something, we can go to the government and say, ‘You can’t do this because we have this right to clean air,’ or ‘you have to move quicker to clean up my water.’”

The consequences of the new constitutional amendment may not always be straightforward. Things could get tricky in cases where a development proposal might have both positive and negative effects on the environment, says Columbia Law School’s Gerrard. Windmills, for example, are a central component in government plans to reduce greenhouse gas emissions. But they can also kill birds, and residents opposed to building windmills might reference the amendment in their arguments.

New York’s constitution has an existing set of provisions for conservation, but these have made it the legislature’s responsibility to take action, and so far courts have not required them to do so, says Gerrard. Courts also haven’t given New Yorkers the ability to sue if the legislature doesn’t act. By contrast, “the new amendment does not depend on the legislature; it seems to give power directly to the people,” he wrote in an email.

As advocates in other states pursue their own version of environmental rights legislation, they will likely see their own conflicts over the particulars of each bill. Van Rossum is now working to get green amendments passed in New Jersey, Maine, and New Mexico. The language is slightly different in each case, which could influence the way different states interpret the amendment.

For van Rossum, getting the wording just right is worth the effort. “We all know in our hearts and our minds, as people here on this earth, that we have inalienable rights to things like clean water and clean air,” she says. “[But] if they’re not enforceable legally, you don’t actually have them.”