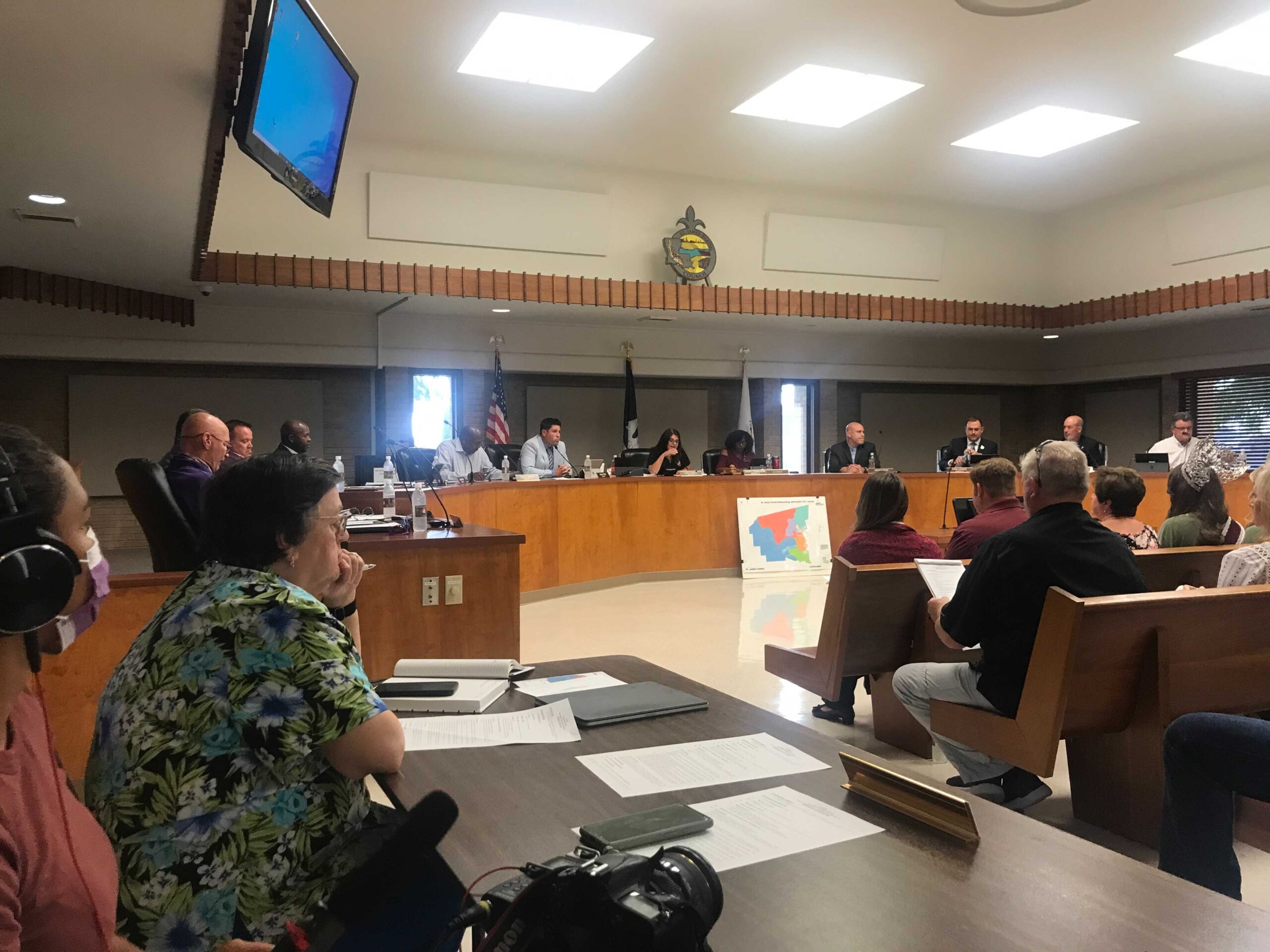 The St. James Parish Council on Wednesday effectively rejected a bid to allow for industrial development in a neighborhood currently zoned residential, leaving the land’s owner — the South Louisiana Methanol (SLM) company —  on its own to resolve a stalled $2.2 billion project on the site.

The proposed ordinance would have rezoned a residential neighborhood in the parish’s 5th Council District — a low-income, majority-Black district on the parish’s west bank that is already home to a large number of industrial sites — to a “residential/future industrial” designation.

The council’s rejection of the change effectively precludes SLM – a joint venture between the New Zealand-based Todd Corporation and a Houston-based subsidiary of the Saudi Arabian company SABIC – from selling the property to any entity with designs for industrial development.

The ordinance, introduced by Councilmember Donald Nash, never went to a vote, as no council member seconded a motion to consider it.

Originally announced in 2013, then again in 2019 under reshuffled ownership, the proposed SLM plant would have encompassed 1,500 acres on the parish’s west bank. It was projected to produce approximately 2 million tons of methanol annually, which would have made it one of the largest such facilities in the world. The project would be directly adjacent to Welcome Park, the 5th District’s only public park, which is one of the concerns residents have raised publicly.

The plant was designed to utilize natural gas in its production of methanol, which is used in a variety of products and applications – ranging from plastics to fuels. The domestic price of natural gas has recently spiked due to the fallout from Russia’s invasion of Ukraine, and the resulting increase in U.S. gas exports to Europe.

Greg Johnson, an attorney with Liskow & Lewis who addressed the council on SLM’s behalf on Wednesday, said the company has invested $70 million toward the $2.2 billion project, while previous reporting has put the figure at $300 million.

Because the project was approved before current zoning was adopted, SLM has the right, under parish land use regulations, to build the plant in spite of the residential zoning. But the project has been stalled for years with little work occurring on the site, and the company has allowed some required permits to lapse.

One of the criticisms raised by the council and by members of the public is that SLM did not articulate a clearly defined vision for what it plans to do with its property now that the original plan appears to be off the table.

Johnson told The Lens after the meeting that the company is reviewing its options, which could include either selling its property or redesigning the project somehow. Johnson did not offer specific details about the future of the property, saying only that the zoning change was necessary so that SLM could explore different opportunities.

“This land use redesignation is required in order for SLM to pursue new investment partners so that they can position the property for potential projects supporting growth for the parish,” Johnson told council members. “There is not any particular one at this time, but by changing the designation will allow them to explore other opportunities for the property “

One of those opportunities could be to sell the land to another industrial developer. Had the council adopted the zoning ordinance on Wednesday, it would have opened the door for SLM to sell its property as an industrial site, pending the approval of the parish’s officials. But by rejecting it, the current zoning designation for the property stands: treating it as “residential growth” for anyone other than SLM and its $2.2 billion methanol plant.

That zoning decision was made in 2018, according to the council’s agenda. The parish’s original land use plan from 2014 treated the area as “residential/future industrial,” which residents had publicly opposed.

For Barbara Washington, a resident of St. James Parish and a founding member of Inclusive Louisiana, a nonprofit focused on environmental justice, the council’s decision was a welcome surprise.

“We saw humanity there tonight,” she said. “It seemed like all the time that we’ve been talking, they haven’t been listening –  but tonight, it seemed like they were actually listening, and that’s hopeful for us,” she told The Lens.

‘The clandestine conditions of these meetings’

Meanwhile, the council’s process for considering the ordinance came under scrutiny after two attorneys from the nonprofit environmental legal organization Earthjustice, Corinne Van Dalen and Zora Djenohan, spoke before the parish council two weeks ago.

They claimed to be in possession of documents showing communications between St. James Parish President Pete Dufresne and SLM CEO Paul Moore about the proposed zoning change. Then on Wednesday, Djenohan said that she was in possession of documents showing that several councilmembers met with SLM leadership in private, which raised questions about whether the councilmembers had violated the state’s open meeting law, and to what extent SLM had the capacity to influence the council’s decision making.

Earthjustice provided those documents, along with others, to The Lens on Thursday.

The documents show that in July, Dufresne invited Councilmembers Vondra Etienne-Steib, Clyde Cooper and Alvin St. Pierre to a Microsoft Teams meeting with Moore and other employees of SLM, under the subject line “Land Use Discussion.” In a separate email, Dufresne invited Councilmembers Ryan Louque and Jason Amato to meet with Moore and SLM employee Price Howard under the same subject heading.

In total, a majority of the seven-member council — a voting quorum — was invited to participate in a meeting. Under the law, members of a public body can’t privately meet in a quorum to conduct or discuss public business.

“The exact attendance and subject matters discussed at each of these meetings remains unclear due to the clandestine conditions of these meetings,” Van Dalen and Djenohan said in a letter to the council.

“This raises the issue as to whether the Parish violated Louisiana’s open meetings law by privately convening the majority of its Council members over a series of meetings to discuss land use at SLM’s site,” they said.

Even if separate meetings were held — each with less than a majority of the council — to get around the public meeting requirement, it is also illegal to attempt to circumvent the open meetings law. Environmental groups have previously sued the parish over allegations officials conducted secret meetings with parish council members and members of the parish Planning Commission. Though each meeting was attended by less than a quorum of either body, the attendance of members in those meetings, when combined, constituted a quorum, according to the suit.

The records compiled by Earthjustice also show that Dufresne sent Moore a draft of the parish’s land use ordinance amendment. Moore responded by stating that he would like for the rezoning ordinance to include more of SLM’s land than originally proposed, and that some of the land SLM committed to using as a buffer should instead be zoned as industrial.

While “it was SLM’s intent to use a portion of this land for buffer zones, SLM would like to have this land designated industrial so that site use flexibility is maintained,” Moore wrote. SLM was also willing to give up a small portion of the land directly adjacent to Welcome Park, he said.

It appears that at least some of Moore’s suggestions were incorporated in the final zoning change ordinance.

Djenohan told the council on Wednesday that such decisions should not be made in private. At the end of the day, the change could affect the lives of the council’s constituents, and therefore needs to be made in public.

“This is not a decision without consequences, and it needs to be made in the open, in public meetings,” she said.