Since the early 1950s, the world has created 8.3 billion tonnes of plastics, with most of it now languishing in landfill or the environment. The weight alone is equivalent to one billion elephants, according to a 2017 study published in the journal Science Advances.

Despite this, the petrochemical industry, home to the world’s favourite fossil fuel giants such as ExxonMobil, Dow Chemical, Chevron and Shell, plans to double plastics production over the next 20 years, and according to a 2020 report from Carbon Tracker, will be investing $400 billion in the next five years alone.

Carbon Tracker estimates that as a result, “the carbon footprint of plastics [will] double by the middle of the century to around 3.5 gigatonnes”. This is completely at odds with the Paris Agreement, which requires global CO2 emissions to halve by 2030.

This infographic from the Carbon Tracker report illustrates the costs to society of virgin plastics production: 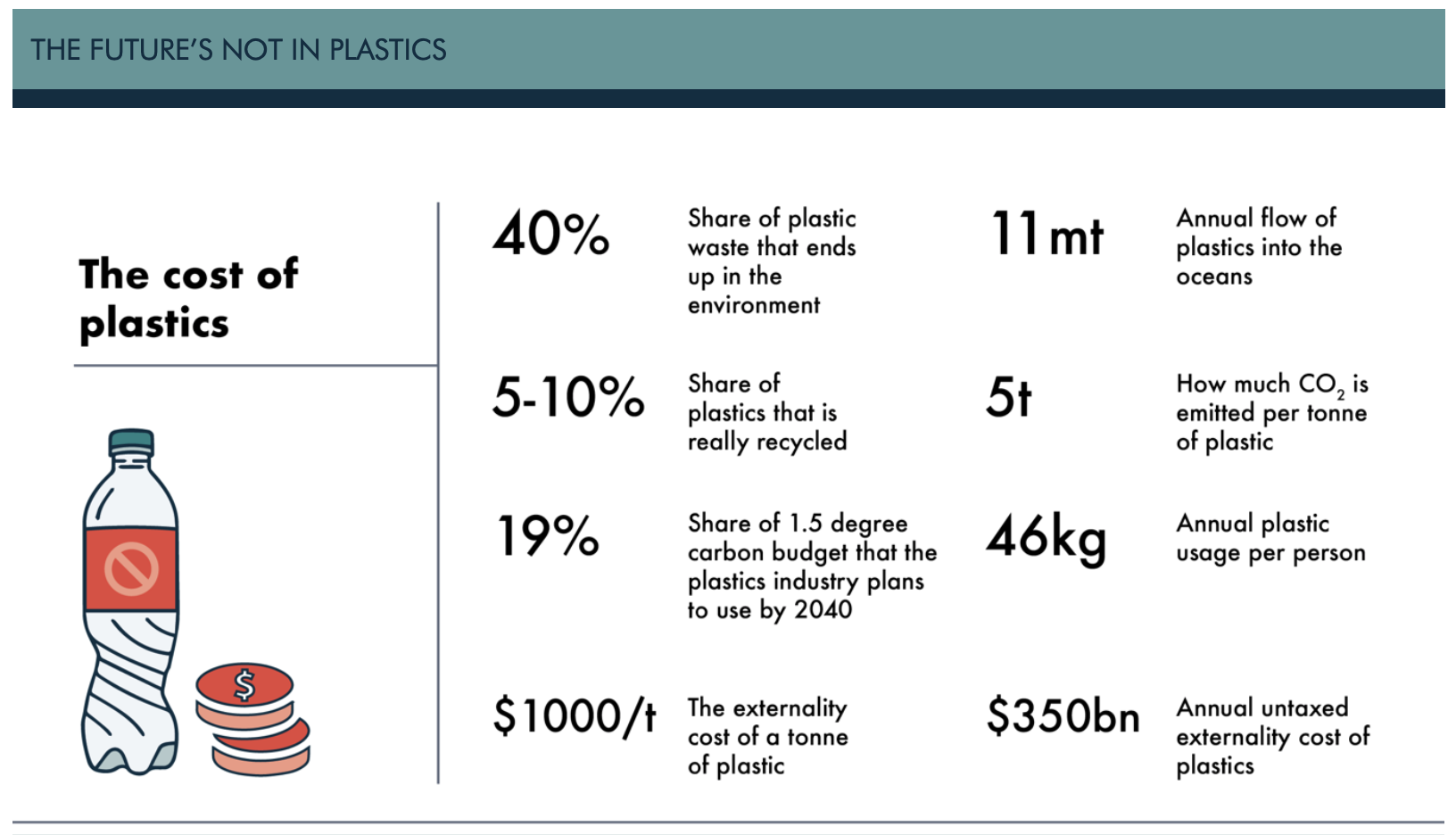 Even though less than 10% of all the plastic produced since the 1950s has been recycled, still the government and industry focus on recycling as the solution to tackling the mountain of waste.

Jane Bremmer, the secretary of Zero Waste Australia and campaign director for the National Toxics Network told MWM that this was simply greenwashing.

“Industry is selling plastic recycling to the world as the solution … but they know full well this is greenwashing designed to maintain business as usual as they drip feed relatively small quantities of recycled plastic into the virgin feedstocks.”

Take PET (primarily plastic drink bottles) plastic, which is the easiest of all plastics to recycle. Even so it cannot compete with virgin plastic because it is between 83% and 93% more expensive to recycle into a new bottle than to produce a new one from raw materials.

As outlined in Australia’s 2020 National Waste Report, the price of virgin plastic has fallen substantially, which has flow-on effects for the commercial viability of recycling plants.

For most recycling companies, “the money they can make from kerbside recycling will now be less than the cost of providing the service”.

According to the most recent ‘Australian Plastics Recycling Survey’, in 2018-19, Australia recovered just 11.5% of the 3.5 million tonnes of plastics it consumed that year. Consumption of plastics was also the highest it has been in the last five years: 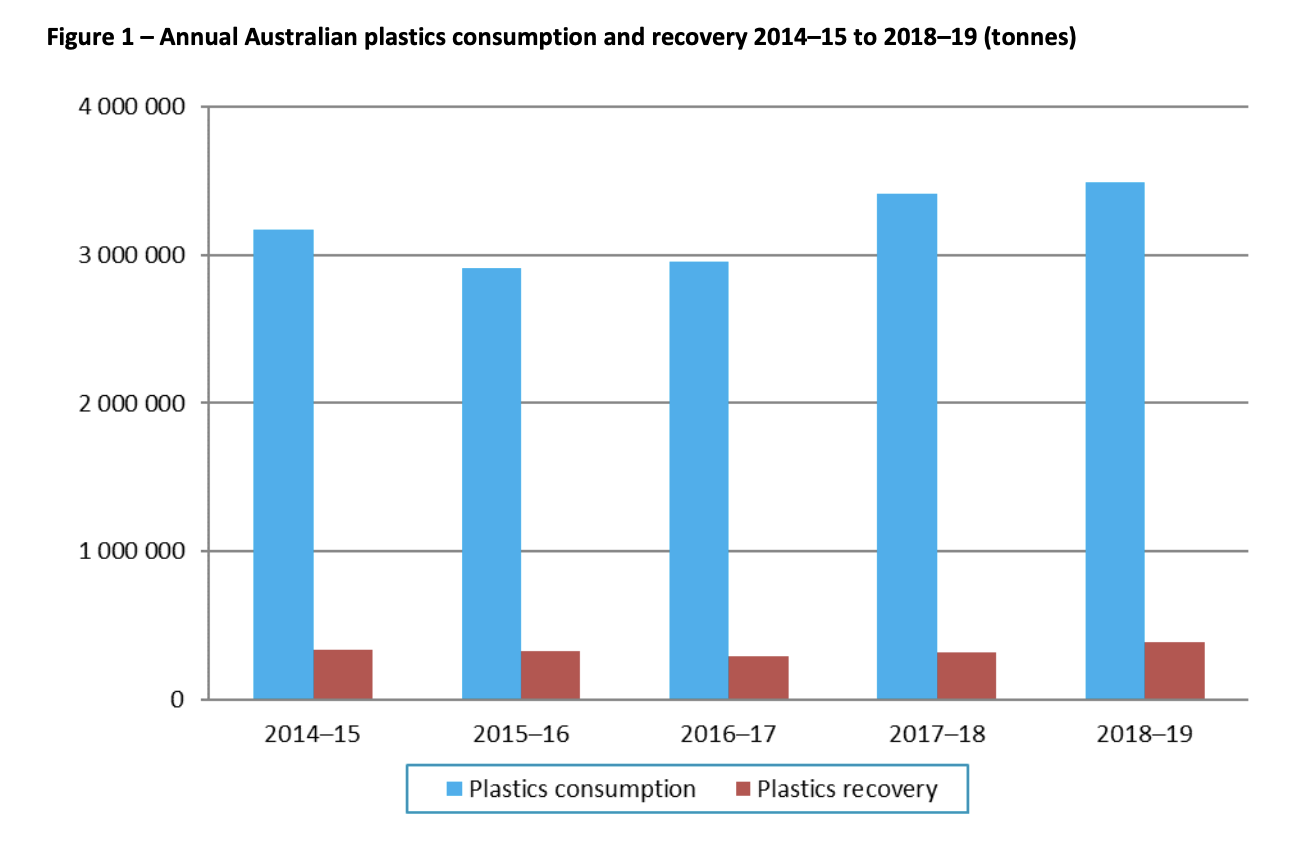 The chart below breaks down the consumption rates and recovery rates of plastics in 2018-19 into the main industry sectors.

Consumer packaging was the largest user of plastics, and although recycling rates in this sector were the second-highest, they were still just a paltry 27%.

The automotive industry recycled a tiny 1.9 per cent, while the electrical and electronics recycling rate was only marginally higher at 4.5%. 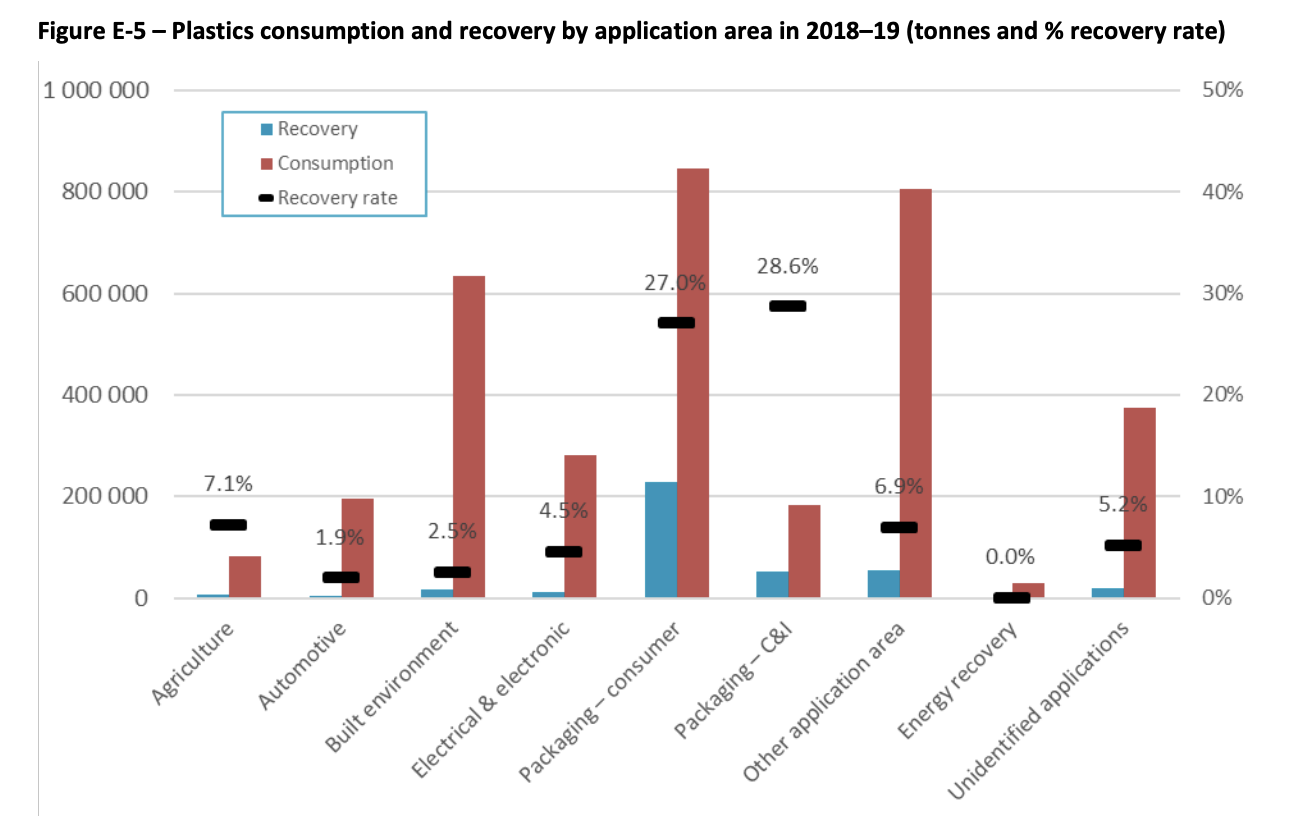 The Minderoo Foundation, established by Australian businessman Andrew Forrest and wife Nicola, released a report in May which found that in 2019 just 20 companies “accounted for more than half of all single-use plastic waste generated globally – and the top 100 accounted for 90 per cent”. ExxonMobil generated the most waste, followed by Dow Chemical, Sinopec, Indorama Ventures and Saudi Aramco.

The report recommends a levy on the production of virgin plastics and the establishment of a global treaty to “address the problem at its source, with targets for the phasing out of fossil-fuel-based plastics”.

In its 2019 National Waste Policy Action Plan, the Federal Government announced plans to “stimulate demands for recycled materials relative to virgin materials” but did not provide any specific policies. Its 2021 National Plastics Plan pushed a similar line, prioritising recycling ahead of reducing production.

And while the Greens policy focuses on phasing out single-use plastics and encouraging consumers to buy less plastic, they too champion recycling ahead of levies on companies producing virgin plastic.

Saved by a Kit Kat

A spokesman for federal Environment Minister Sussan Ley told Michael West Media: “The Morrison Government is taking unprecedented action to manage plastic packaging waste so we can reduce its impact on the environment.”

This included targets to achieve 20 per cent average recycled content in plastic packaging by 2025.

“It is simply disingenuous of the federal Environment Minister to suggest that Nestle’s new recycled Kit Kat wrapper is a game changer. Nestle is perpetuating a single use plastic packaging model through recycling soft plastics.

This tokenistic action by one of the biggest plastic polluters on the planet won’t be enough to address [the problem], for which they have played a major role in creating.”

The 2020 Break Free From Plastics report found Nestle was in the top three highest global plastic polluters for consumer brands for the third year in a row, alongside Coca-Cola and Pepsico.

“It’s more appropriate to [promote] the production of recyclable materials, to put a positive spin on things.

Tamblyn said ACOR had invested “$2 billion in new technologies [for recovery facilities] and more recycling infrastructure”. When asked how that would improve recycling rates, he said, “I haven’t got an answer for that … I don’t think there’s one thing that’s better than anything else.”

Tamblyn described an app ACOR will be releasing later this year that “helps people understand what [recycled waste] goes where” in regard to local council areas. However, these databases already exist.