Beside the airport on the outskirts of Cluj-Napoca, one of Romania’s fastest growing cities, lies an enormous landfill site. As you fly in, it’s easy to miss the multicolored roofs scattered between rolling green turf and mounds of waste. But at ground level, the area is teeming with life. Horse-drawn carts cross paths with empty garbage trucks returning to the city. Barefoot children run between makeshift wooden houses and crows circle overhead.

This is Pata Rât, the country’s biggest landfill and long one of its most glaring environmental sins. For decades, pollution leached from untreated waste and garbage fires blazed, occasionally killing the occupants of those wooden shacks.

Under pressure from the EU, the city began work on closing the site in 2015. Some 2.5 million tons of waste, accumulated over 70 years and covering an area the size of 27 football pitches were turfed over, and at the end of 2019, the local authorities declared Pata Rât “history.”

Yet for the 1,500 Roma people still living here, Pata Rât is very much alive. And so is the environmental hazard on their doorstep. Two “temporary storage” landfills set up beside the old one in 2015 are still growing steadily, and experts say the old waste was never properly dealt with.

“This was not an ecological landfill, it was not built in line with European standards,” Nodis says. “All these toxic substances went into the soil, into the groundwater. Everything in the area is polluted.” 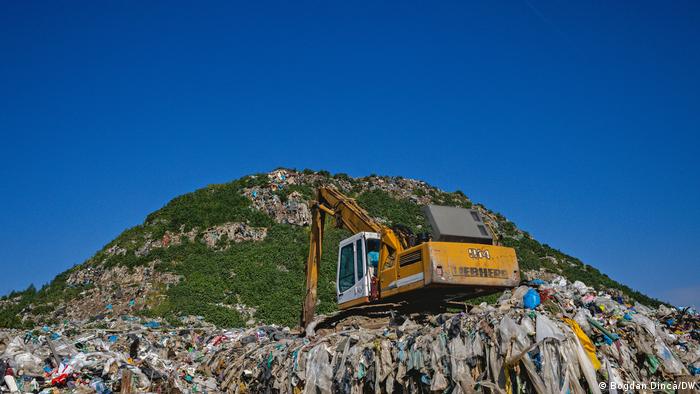 Driven from the city

The Roma residents of Pata Rât began to arrive in the late 1960s and early 1970s. Some were driven by poverty to move to the landfill and work as waste pickers, but most have come in successive waves of evictions since Cluj-Napoca began to see a real estate boom in the 2000s. The last was in 2010, when local authorities evicted 350 inhabitants from Coastei Street near the city center.

Linda Greta Zsiga remembers the cold December morning when she and her family were woken by police, city officials and bulldozers at their door. Just two days before, they and 75 other Roma families living on the street had been given notice of their eviction. Their new home was to be a complex of small, modular units nestled between the between Pata Rât’s existing camps. 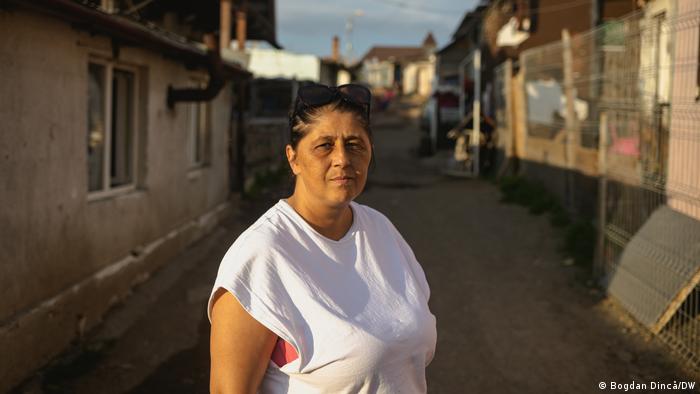 Zsiga says the Roma community on Coastei Street was well integrated. They had been there for generations, they paid rent and utilities on their publicly owned homes, and their children attended local schools and kindergartens. Yet suddenly they were being dumped on the city’s trash heap. “They considered us garbage, not humans,” Zsiga says, “and they thought we deserve to live there.”

Responding to a survey last year, seven out of 10 Romanians said they don’t trust the Roma. Between 20% and 30% said Roma people have too many rights, that the state should be allowed to use violence against Roma, or that discrimination and hate speech against the Roma should not be punished.

Such attitudes are not unique to Romania. Across Europe, racism against the continent’s largest ethnic minority results in denial of basic civil rights, exclusion from employment and public services, and — perhaps most strikingly — the marginalization of Roma communities to areas that lack adequate water, sanitation and waste management.

Often, these sites are also in hazardous locations. A study published last year by the European Environmental Bureau (EEB) on “environmental racism against Roma communities in Central and Eastern Europe,” found that the Roma were “disproportionately exposed to environmental degradation and pollution stemming from waste dumps and landfills, contaminated sites, or dirty industries.”

Cramped, dirty and cut off

Arriving at Pata Rât, Zsiga found her extended family — 12 people altogether — crammed into a 16-square-meter room. Space was so cramped, they had to keep most of their belongings outside. They shared a single toilet and cold-water shower with the inhabitants of three other similarly overcrowded rooms.

Zsiga remembers gazing out of her window across a sea of garbage. “There were no doves, no trees,” she says. “I love nature.”

A 2012 report by the UN Development Programme found that 22% of adults there suffered from chronic disease or some form of disability. Researchers documented high incidence of skin infections, asthma, bronchitis, high blood pressure, heart and stomach problems, and a report European Roma Rights Centre found that over two years following their eviction, reported health problems more than doubled among the Coastei community. 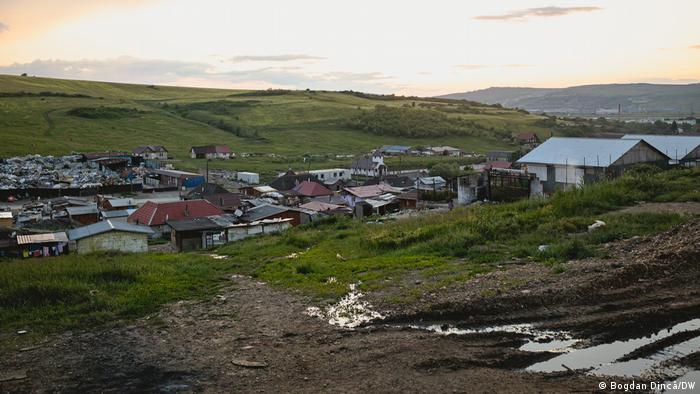 The oldest camp at Pata Rât is called ‘Dallas’ after the US soap opera. Driven by poverty, Roma began arriving here in the late 1960s to live off the landfill as waste pickers

The EEB study describes one of the major factors in environmental racism against the Roma as forced eviction from “places with high economic value.” The Coastei community wasn’t given a reason for their eviction. But Zsiga has no doubt why they were moved. “They wanted to ‘clean’ Cluj of Roma,” she says. “Now very few Roma still live in the city.”

The municipality of Cluj-Napoca told DW that they are cleaning up Pata Rât and providing health and other services to the community. They also stated that they are trying to prevent evictions and are partners in a program providing housing for 30 families, although they are not providing funding to the scheme.

Waste-pickers put out of business

There isn’t any solid health data from Pata Rât since the landfill was covered over, but an NGO worker in the area said respiratory diseases remain common, including among children. And economically, the closure of the dump has made life in Pata Rât even harder.

Adela Ludvig, a 28-year-old mother of four, has lived beside the landfill for as long as she can remember. Her home is built from plywood, the roof an old canvas advertising banner — scrap materials collected from the dump. These days, her “villa” as Ludvig calls it, has a view onto a chemical waste dump covered in blue plastic foil and protected by barbed wire. 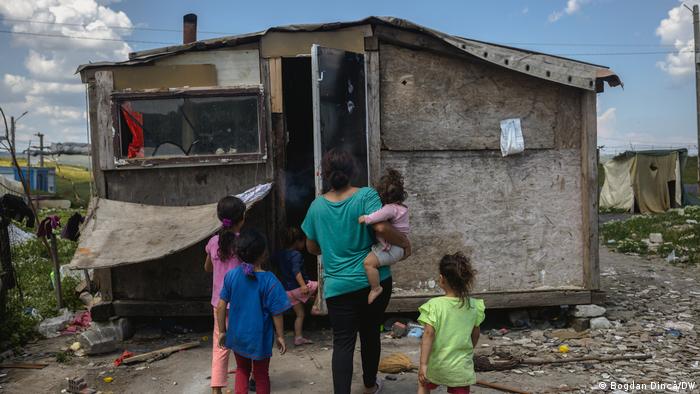 Ludvig used to collect plastic bottles and foil, cans and cardboard. She says a local recycling company paid the equivalent of €0.12 ($0.14) for a kilo of plastic, meaning she could make €40 in a day. “I could buy food,” she says, “or medicine, when the children needed it.”

But the new “temporary” dumps are fenced off. When the landfill closed, waste pickers like Ludvig were left without work. “People were crying with hunger,” she says.

Ludvig and her children — she has a fifth on the way — now live on the €220 she gets in child benefits each month. The nearest source of water is several hundred meters away and she has to visit it four or five times a day to meet her family’s needs. They have access to a power generator but cannot afford to pay for gasoline.

A year after the landfill was declared “history,” the major of Cluj-Napoca promised that the Pata Rât camps would “disappear by 2030” — without giving any indication of what is to happen to the 350 families living there. But well before his announcement, residents had been taking matters into their own hands.

In 2012, Zsiga and others from Coastei camp set up an association that’s working with other NGOs to campaign for housing solutions for Pata Rât, and suing the authorities over the evictions. They are currently awaiting a decision on their case from the European Court of Human Rights. 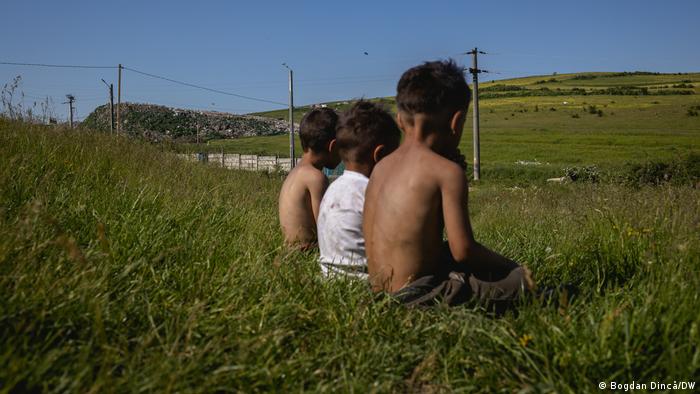 The grassy meadows of Pata Rât might look picturesque, but environmental scientists warn that the site is still contaminated by untreated waste

And thanks to an initiative supported by Norway Grants (by which the Norwegian government funds social projects in southern and eastern Europe) 35 families from Coastei were moved to Cluj-Napoca or nearby villages between 2014 and 2017.

Zsiga, her partner and children, now live in a three-room apartment in the city. But she hasn’t turned her back on Pata Rât. Her siblings and their families still live there and she’s working at the site to support another 30 families who will move in a second stage of the initiative. “I wish that no one is left in Pata Rât,” Zsiga says, “no one deserves to live there.”