One of the most overwhelming aspects of modern life, in my (Rebecca) opinion, is knowing about major global-impact issues like climate change and plastic waste pollution and feeling like there isn’t much that I can do to really change things.

Take all that plastic we go through day in and day out. I’m talking about the stuff that comes with food and bottled drinks, cosmetics, carryout containers, bags and wrappers — more than 40% of all plastic made is packaging, which is used only once or twice before being thrown away. Don’t we feel at least a little guilty when we toss one plastic snack wrapper or coffee cup after another into the trash?

If not, maybe we should. According to a recent analysis examining global plastic waste generation between 2010 and 2016, the United States was responsible for more plastic trash than any country in the world. That’s millions and millions of tons of plastic waste. Per capita, that boils down to nearly 300 pounds of plastic trash per person(!) per year.

This story comes from Life Kit, NPR’s family of podcasts to help make life better — covering everything from exercise to raising kids to making friends. For more, sign up for the newsletter and follow @NPRLifeKit on Twitter.

Will it be recycled? Some will, yes, but not that much. It’s estimated that only about 9% of plastic waste generated in the U.S. is recycled and that the rest ends up in landfills, incinerators and, unfortunately, marine environments such as rivers and oceans. And there, according to the National Oceanic and Atmospheric Administration, it will remain for hundreds of years.

So back to you and me and the question of whether we can do anything about all this. We spoke with some people who’ve given this topic a lot of thought. Here’s what they’ve come up with:

Learn the story behind the stuff you use.

Understanding the bigger picture can deepen your resolve when it comes to making a personal change. Yvette Arellano runs an environmental justice organization called Fenceline Watch. It’s an advocacy group based in Houston that helps communities of color and low-income neighborhoods disproportionately affected by petrochemical pollution from facilities congregating along Houston’s Ship Channel.

For years, Arellano helped these communities in their fight for clean air and water but did so without realizing what those petrochemical plants were making. To Arellano, the work was all about the pollution until they realized that the pollution coming from the refineries was connected to the making of plastic.

This discovery had a big impact on Arellano, who could no longer look at plastic without seeing the effects on people’s health. It “affects children’s lives. It increases cancer rates, and it hurts people,” Arellano says. “Why would we want to participate in something that is actively oppressing and hurting people’s health?”

Do an audit of the plastics in your home.

Before you can cut back on plastic, it helps to understand how much you’re using. One weekend, environmental activist Shilpi Chhotray says, she put pen to paper and took an inventory of the plastic in her apartment, making a list of the various kinds: chip bags, condiment bottles, plastic wrap, etc. “Tally up the different types of plastic packaging used,” she advises, “and go through the trash as well.” Chhotray notes that you’re likely to find a lot of plastic in the kitchen and the bathroom.

Once you have your list, do a little more homework. Check out your local recycling program, and see which of those plastics can actually be recycled. (More on that later.) And when they can’t be recycled … 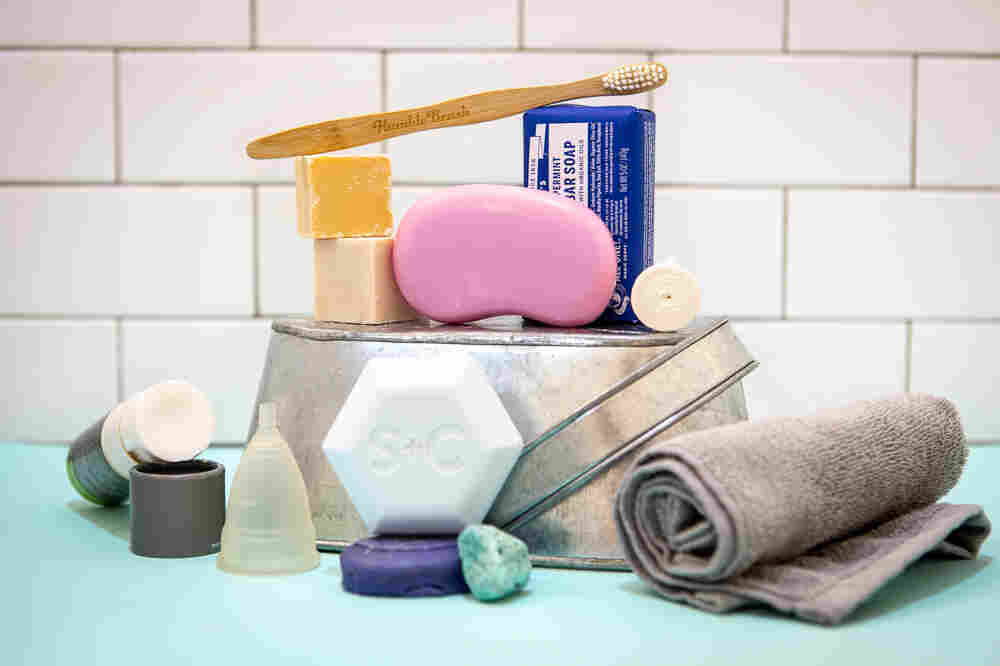 There are plenty of ways to cut down on plastic waste in the bathroom. Pictured here: bar soap, a bamboo toothbrush, plastic-free floss, plastic-free deodorant, a menstrual cup, a shampoo bar and a washcloth rather than a plastic loofah.

Look at the items on your plastic inventory list and ask yourself, “What can I replace the plastic with?” Chhotray is a big fan of going reusable, and her backpack is proof: “I carry my reusable water bottle, my reusable tumbler because I’m a tea addict. I have bamboo cutlery.” She says some days she also carries chopsticks and a reusable straw. “My family sort of makes fun of me because my backpacks are starting to get bigger and bigger every year.”

Arellano swapped bath products that came in plastic bottles for ones that come as bars — a shampoo bar and a bar of soap.

At the grocery store, Chhotray says don’t buy plastic bags of rice and beans. She recommends purchasing dried pantry staples in bulk instead. And, she says, bring your own containers to avoid using the plastic bags provided by the grocery store. Chhotray discovered that small canvas bags she’d bought for an art project work just as well, or you can bring your own jars or other reusable containers — just make sure to zero the scale before filling up.

You can even get creative and DIY some of your swaps. When Chhotray realized her favorite granola came packaged in a pouch she couldn’t recycle, she started making her own.

It’s worth noting that while some of these swaps cost money up front, they can help you save in the long run.

Be a conscientious recycler.

Recycling correctly can keep a lot of plastics out of the waste stream. So put the right stuff in the recycling bin, and don’t try to recycle items your county doesn’t accept — just because you put bubble wrap or a potato chip bag in the bin doesn’t mean it’s going to magically be recycled. This kind of “wish-cycling” may alleviate some of your guilt, but it clogs up the system and makes recycling more expensive. As Keefe Harrison, CEO of the Recycling Partnership says, “When in doubt, leave it out.” 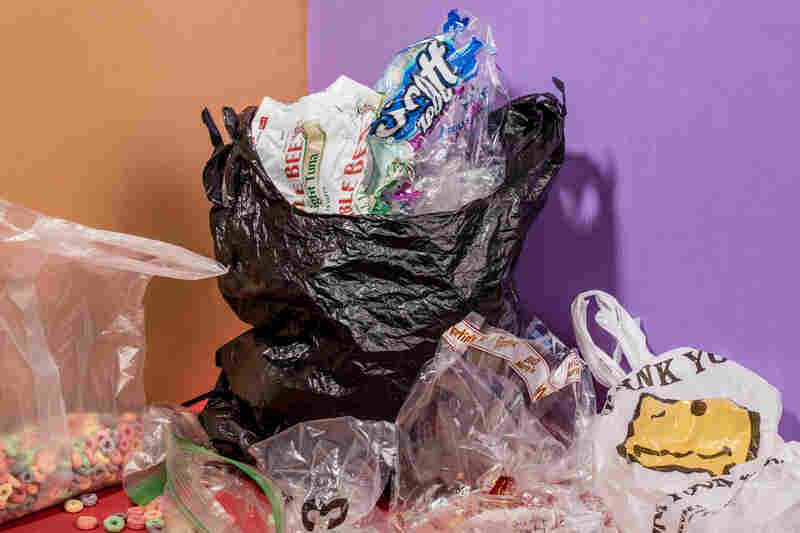 INTERACTIVE: RECYCLING 101 What’s recyclable, what becomes trash — and why.

There are thousands of municipal and private recycling programs in the U.S. and they can vary a lot from place to place, so don’t assume what your local program will take. If you aren’t sure, do a web search and just plug in the name of your town along with the word “recycling guidelines.” The top one or two hits should produce links for a guide to your town’s recycling requirements.

Some retailers also offer recycling programs for products from coffee pods to dog food bags to deodorant containers. To learn more about the ins and outs of what’s recyclable, what’s not — and why, check out this NPR interactive.

Another very important tip, Harrison says, is to keep plastic bags of all kinds out of your recycling bin. “They tangle up the equipment in a recycling process, and they cause the whole system to shut down.”

But take heart, conscientious recycler, because plastic bags and wraps, like the ones around toilet paper and paper towels, can be taken back to most major grocery stores and box stores for recycling. Just look for the drop-off bin near the front of the store. 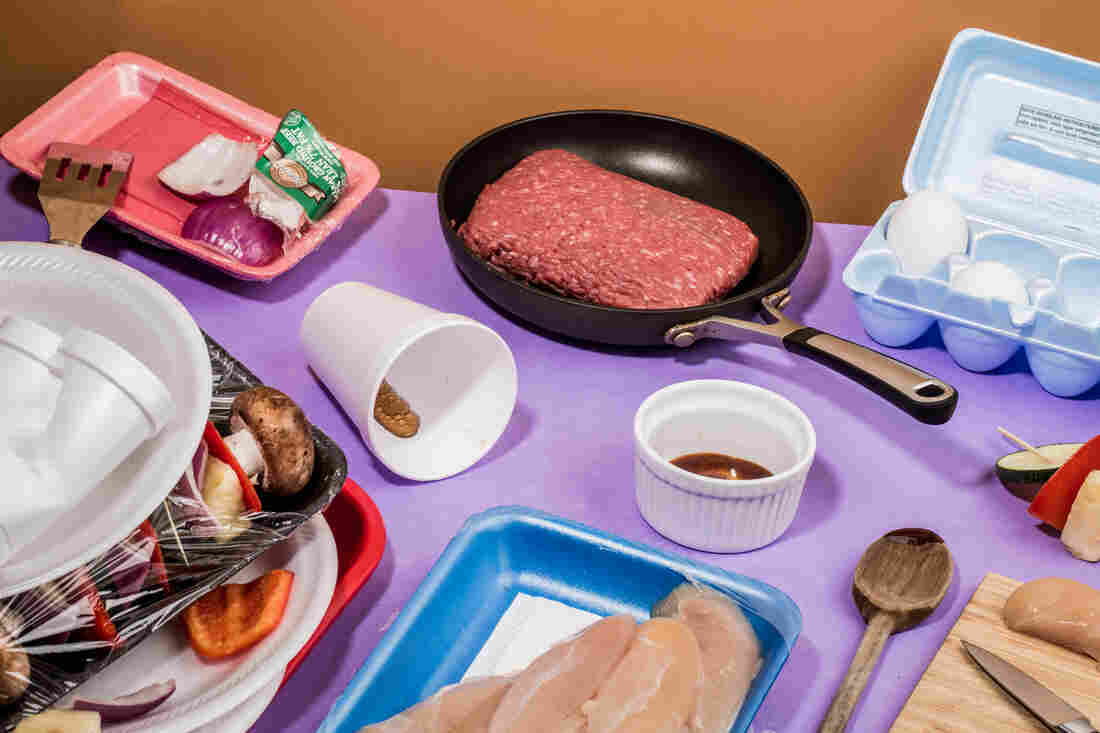 Polystyrene foam, like that used for meat packaging or egg cartons, is not recyclable unless a drop-off location exists in your area. Dozens of cities throughout the U.S. have banned plastic foam.

A lot of plastic packaging that’s created and used today can’t be recycled. It’s a big problem, notes Harrison. Just because you see chasing arrows in the shape of a triangle and a number printed on the bottom of something doesn’t mean it can actually be recycled.

If you bring home a product you like but its package isn’t recyclable, Harrison says to tell companies how you feel: “They’re listening, more than ever before.”

Use the comment section on a company’s website or its social media accounts. Harrison suggests you tell them, “I like your product, but I’m worried about this label. Is it recyclable? Ask them. Wait for an answer.”

Don’t be too hard on yourself.

This is my suggestion. I’m no expert on the psychology of all this, but I do know that when something seems overwhelming, I’m tempted to give up on it altogether. So just do the best that you can.

Individually, you are not going to solve the plastic waste problem, but you’re not alone in wanting to do so. A lot of people around the world are also concerned and are making decisions based on their concerns. If you join them in adopting some of the small changes we’ve discussed here, it could add up to something meaningful.

Chhotray acknowledges that lowering your plastic footprint takes work. But whenever you do find a good, practical substitute for a single-use plastic, she says, “it makes you feel so good inside. … It’s sending a strong signal to everybody around you that a plastic-free world is possible.”

The audio portion of this episode was produced by Audrey Nguyen.

We’d love to hear from you. If you have a good life hack, leave us a voicemail at 202-216-9823, or email us at LifeKit@npr.org. Your tip could appear in an upcoming episode.

If you love Life Kit and want more, subscribe to our newsletter.