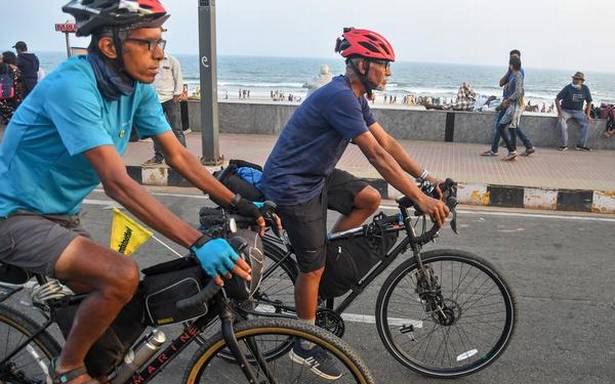 Milind Tambe and Shriram Kondhawekar are cycling along the Indian coastline covering a distance of about 6,179 kilometres to highlight the ill-effects of single-use plastic

At a time when Indian coasts are battling a tidal wave of plastic pollution, two cyclists from Maharashtra are on a mission to highlight the ill-effects of single-use plastic and its impact on marine life. Naval veteran Milind Tambe, 56, and 49-year old Shriram Kondhawekar are cycling along the Indian coastline covering a distance of about 6,179 kilometres as part of their Indian Coastal Cycling Expedition.

The Pedalbums, as they call themselves, started the first leg of their journey from Mumbai last February. The journey had to be halted in Goa due to the second wave of the pandemic.

Milind and Shriram resumed their expedition from Goa on November 14 with an aim to complete the remaining three legs of the journey cycling through Kanyakumari, Visakhapatnam, Kolkata and Gujarat before culminating their expedition in Mumbai.

“While travelling through the beaches, we came face-to-face with the extent of plastic pollution plaguing our coastline. The beaches are mostly polluted with single-use plastic. Pollution was worse on beaches around urban and semi urban areas, while rural coasts had negligible amounts of single-use plastic,” says Milind during an interaction in Visakhapatnam earlier this week.

“We are carrying the little plastic generated along our tour till we find a designated recycling facility. Even today my bag contains used biscuit wrappers and the like, which I will carry with me till I can dispose it off responsibly,” says Milind. “We are against irresponsible disposal of single-use plastic. There are ways to upcycle and that is what we tell whomever we interact with,” adds Shriram.

The cyclists’ expedition has been formally recognised by the Ministry of Youth Affairs and Sports under the Fit India Movement.

The duo is cycling with Fuji Touring and Marin Four Corners bikes. “These cycles are made for cycle touring and are capable of carrying heavy loads of the touring setup. Also the frame geometry makes it easy to attach panniers and frame bags on the cycle,” explains Milind.

Milind says they are following a high protein and carbohydrate diet during the expedition. The duo’s fitness preparation was taken care of by Fittr, their fitness sponsor.

“They analysed our body structure and dietary habits and gave us six months of strength training and endurance building exercises. They also made customized diet plans. This has helped us a lot in this expedition,” says Milind.

The cyclists were on the road for 50 days before coming to Visakhapatnam. “We found many good souls along the way. People were very generous and more than willing to help us, be it with finding accommodation, or directions or just general advice,” says Shriram. There were instances where the cyclists had food at small wayside hotels.

“The owners, after chatting with us and knowing the objective of our tour, refused to accept money,” recalls Milind.

The cyclists have been meeting several cycling groups, who hosted them for dinners and showed them around.

Talking about the toughest parts of the expedition, Milind says: “The southern coast from Kanyakumari was one of the most challenging. It is not because of the terrain, but the humid climate that was extremely energy sapping. Being physically fit and mentally strong are of equal importance during long-distance cycling. Determination is all that matters,” he says. As far as the gear is concerned, Milind says having a cycle which you can take apart and reassemble is a vital skill. “Cycles need to be suited for the terrain that you would intend to traverse. We have adopted a minimalist approach in our luggage and carry very little in terms of clothes and other accessories,” he adds.

What has been the biggest takeaway from the expedition? “That we have to be adaptive to change, and that we can live with very little. One doesn’t need much to live,” says Milind.