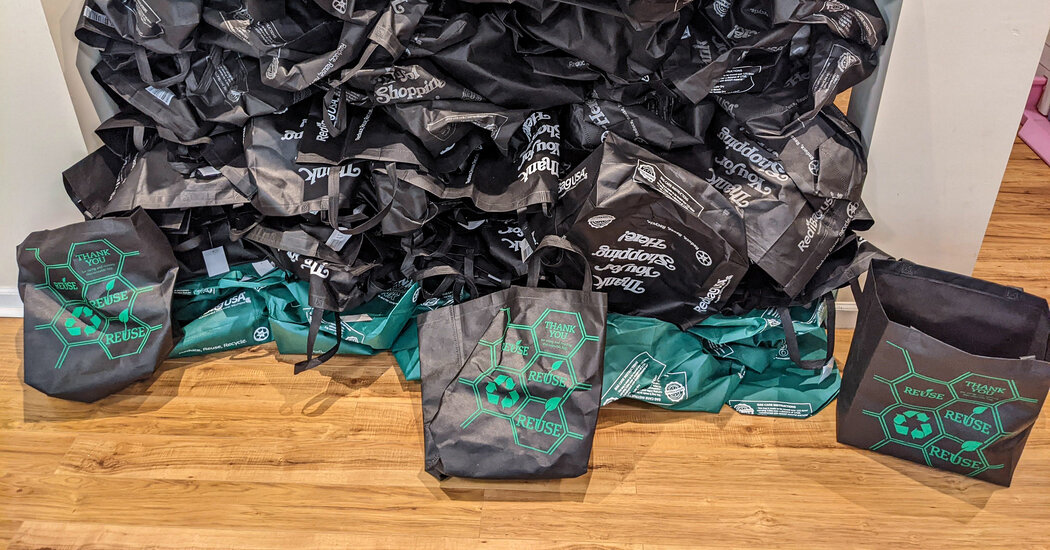 A ban on single-use plastic and paper bags in grocery stores had an unintended effect: Delivery services switched to heavy, reusable sacks — lots of them.

Nicole Kramaritsch of Roxbury, N.J., has 46 bags just sitting in her garage. Brian Otto has 101 of them, so many that he’s considering sewing them into blackout curtains for his baby’s bedroom. (So far, that idea has gone nowhere.) Lili Mannuzza in Whippany has 74.

“I don’t know what to do with all these bags,” she said.

The mountains of bags are an unintended consequence of New Jersey’s strict new bag ban in supermarkets. It went into effect in May and prohibits not only plastic bags but paper bags as well. The well-intentioned law seeks to cut down on waste and single-use plastics, but for many people who rely on grocery delivery and curbside pickup services their orders now come in heavy-duty reusable shopping bags — lots and lots of them, week after week.

While nearly a dozen states nationwide have implemented restrictions on single-use plastic bags, New Jersey is the only one to ban paper bags because of their environmental impact. The law also bans polystyrene foam food containers and cups, and restricts restaurants from handing out plastic straws unless they’re requested.

Emily Gonyou, 22, a gig worker in Roselle Park who provides shopping services for people through Instacart, said she was surprised when she learned the delivery company had no special plans for accommodating the ban. “They pretty much said, ‘OK, do exactly what you’re doing, but with reusable bags,’” she said.

Melting ice. A new study found that the melting of the Greenland ice sheet could eventually raise global sea levels by at least 10 inches even if humans immediately stop burning the fossil fuels. The study reached a more drastic conclusion than earlier assessments in part because it used a different method to gauge ice loss.

Cloud seeding. As climate change makes the Middle East and North Africa hotter and drier, countries in the region have embarked on a race to develop cloud-seeding programs, injecting chemicals into clouds to try to force precipitation. While cloud seeding has been around for 75 years, experts say the science has yet to be proven.

Boosting soy crops. Researchers say that they were able to significantly increase yields in soybean crops by using genetic modifications to increase the efficiency of photosynthesis. The findings hold promise that these methods could increase the food supply as climate change and other threats make it harder for vulnerable populations across the globe to feed their families.

Forever chemicals. Scientists have found a cheap, effective way to destroy so-called forever chemicals, a group of compounds that pose a global threat to human health. The Environmental Protection Agency said it will designate the two most commonly detected chemicals, which have been linked to cancer and have been found in everything from drinking water to furniture, as hazardous substances.

Ms. Gonyou said she goes through up to 50 reusable bags a day, many of which, she suspects, could end up in the garbage.

Compared to single-use plastics, the more durable reusable bags are better for the environment only if they are actually reused. According to Shelie Miller, a professor at the University of Michigan School for Environment and Sustainability, a typical reusable bag, manufactured from polypropylene, must be used at least 10 times to account for the additional energy and material required to make it. For cotton totes, that number is much higher.

The goal of bag bans is to reduce reliance on single-use plastics like the thin bags that became ubiquitous decades ago and which are manufactured from fossil fuels and can take many lifetimes to degrade in a landfill. Many, of course, don’t make it to landfills at all, but get swept away in the wind and end up stuck and flapping in tree branches, or else they pollute waterways and oceans. Paper bags are sometimes seen as an eco-friendly alternative because they are more recyclable and made from trees, a renewable resource, yet they take significantly more energy to produce.

The ban in New Jersey, which applies to grocery stores 2,500 square feet or bigger, is meant to encourage in-store shoppers to skip single-use plastic and paper entirely, and instead bring their own reusable bags.

But that, of course, doesn’t work for most online orders.

In the past three years or so, the nation has seen a major uptick in online grocery shopping. While some of those people have returned to in-person shopping as pandemic restrictions have eased, others formed a new habit. About 6 percent of food and beverage sales are online, according to an executive at Coresight Research, a retail advisory firm.

“There’s clearly a hiccup on this,” said Bob Smith, a New Jersey state senator and co-sponsor of the bill, “and we’re going to solve it.” Mr. Smith said that the legislature would most likely create an exception by amending the rule to allow paper bags for online orders.

A spokeswoman from Instacart said the company was making sure it was complying with state laws and was choosing the most cost-effective reusable bag option for their customers.

Major supermarkets in New Jersey declined to share numbers on what share of their customers shop online and how many reusable bags they’ve sold since the ban. Some, like Walmart and Target, allow customers to forgo reusable bags for store pickup orders, but the default for delivery is still reusable bags. A representative for Stop & Shop said the company was encouraging online customers to donate bags to local food banks.

Mr. Otto, the owner of 101 bags who also has the baby bedroom that’s too bright, said he still intended to get back to sewing a blackout curtain. “Haven’t found the time yet,” he said.

Lisa Budesheim, owner of 89 bags, joked that she was considering setting up a little box in her front yard inspired by those tiny lending libraries for books, except for bags.

And Kye Riddell, who does deliveries, said the garages of some of his elderly customers were heaped with bags. “We just keep delivering in new bags,” he said.

Dr. Miller said the bag situation in New Jersey was emblematic of a lot of environmental policies. “If we don’t pay attention to the unintended impacts of policies such as the plastic waste ban, we run into the potential of playing environmental Whac-a-Mole,” she said. “We solve one environmental problem only to create or exacerbate another problem.”

A few shoppers have found ways to avoid the ban altogether. Andie Ryder, 35, who works for several delivery services in the Glassboro area, never stopped using single-use plastic bags. Just before the bag law went into effect, she stashed away hundreds of the flimsy bags to transport groceries to her customers.

In an interview, Ms. Ryder had unflattering words for the bag ban. There are bigger problems to solve in the world, she said, only to be interrupted by her best friend, who interjected, “I don’t agree!”

Either way, for now Ms. Ryder has found a solution that works for her: One of the stores where she shops has a recycling bin, and when she sees the now-banned disposable bags in there, she snaps them up and replenishes her stash. “I’m a hoarder of bags,” she said.