The plastic food containers, coffee cups and cutlery that came with all that take-away during lockdown are now off the table as the EU gives single-use plastics the bin.

The great packaging purge has begun.

Ten single-use plastic (SUP) products that for years have blighted Europe’s beaches will be largely banned from July 3 as the EU’s Single-Use Plastics Directive of 2019 comes into force.

Plastic cotton bud sticks, cutlery, plates, straws, stirrers, balloon sticks and polystyrene drink and food vessels cannot be sold as of Saturday. Also getting binned are oxo-degradable plastic bags that are marketed as biodegradable but which, according to the EU, break down into microplastics that long remain in the environment.

These disposable plastics make up around 70% of marine litter in Europe. Cafes and restaurants will now be forced to stock cups and straws made of bamboo, cellulose or other biodegradable materials.

But not all has been outlawed as part of the plastics reforms.

SUP bags, bottles, beverage and food containers for immediate consumption, packets and wrappers, tobacco filters, sanitary items and wet wipes will still instead be restricted, while producers will have to pay for the clean-up and institute awareness campaigns about their environmental impact.

The end goal is an EU circular economy model via which any remaining disposable plastics will be reusable or recyclable by 2030.

Here are five things to know about the EU’s plans for a plastic-free future.

1. How the new plastic regime will be implemented

EU Member States have drawn up their own laws to implement the Single Use Plastics Directive. Some have even decided to add to the list of banned SUPs.

As part of France’s ‘law on the circular economy and the fight against waste‘ adopted in February 2020, most fruit and vegetable packaging will also be banned, as will plastic tea bags, confetti and plastic toys offered as part of kids menus. 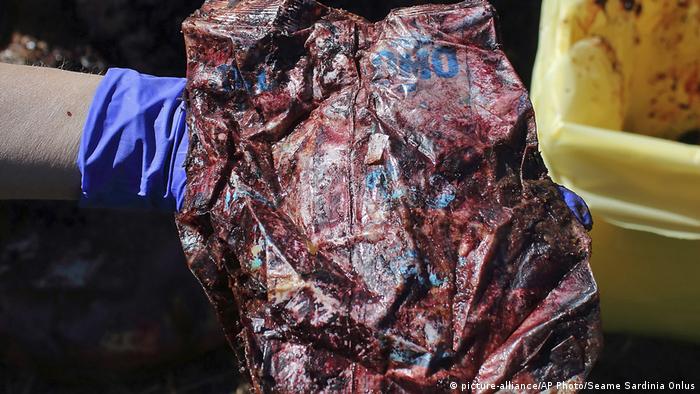 Europe’s battle with marine plastic pollution: Some of the 22 kilograms (48.5 pounds) of plastic found in its belly of a sperm whale found dead off Sardinia in 2019

In Germany, measures approved in Novemberadded EPS polystyrene food containers to the SUPs included in the directive.

In Luxembourg, SUPs have been banned from being sold at festivals from July 3. In Greece, meanwhile, they’ve been outlawed from use in government agencies since February, the first ban of its kind.

Other countries like Italy and Belgium are also introducing a plastics tax or levy to disincentivize the use of plastics.

It might all appear haphazard, but in line with the European Green Deal, all EU member states must ultimately fall in line with a waste and pollution-free circular economy model in which any SUPs are sustainably re-used and recycled by the end of the decade.

While the plastics directive deals with a lot of throwaway plastic items that end up on Europe’s coasts, it does not ban some of the 1.3 billion plastic drink bottles that are sold daily around the world.

Made of PET, these fossil-based plastic containers are, however, one of the few that can be recycled and used to make new bottles, packaging or fibers. The problem remains that only 65% of PET bottles in Europe are collected for recycling, and the rest will take hundreds of years to decompose.

The SUP directive sets a collection target of 90% recycling for PET bottles by 2029 (with an interim target of 77% by 2025). These bottles should also contain at least 25% recycled, as opposed to virgin, plastic by 2025

And manufacturers who sell PET bottles now also have more stringent accountability as part of the “extended producer responsibility” mandate included in the directive. Based on the “polluter pays” principle, producers will have to cover the cost of waste management clean-up as well as raising awareness about the environment impact of the product and the most sustainable disposal methods.

3. Some alternatives to plastic

Natural polymers that have not been chemically modified are exempt from the directive. Any plastics created from modified natural polymers, or fossil or synthetic feedstocks, are effectively banned.

The winners here will be a range of new sustainable materials that are not considered chemically modified. These include regenerated cellulose, which is used to create viscose, lyocell and cellulosic films.

The most abundant biopolymer on our planet, regenerated cellulose is used to create a strong, transparent and completely biodegradable film or sheet that is largely impermeable to oils and greases. A long-used food packaging material before the introduction of oil-based plastics, cellulose is back.

Meanwhile, biodegradable cotton bud sticks will typically be made from compostable bamboo, meaning they can be disposed of in the normal organic waste. All that SUP cutlery is also likely to be replaced by completely compostable, 100% biodegradable bamboo that is cheap and fast to grow.

That said, when implementing the SUP directive, countries like France and Belgiun have banned the labeling of products as “biodegradable” because it can be a form of greenwashing that encourages packaging consumption.

Article 8 of the EU Single Use Plastics Directive specifies that tobacco producers have to foot the bill for the clean-up of cigarette butts containing plastic filters.

Made with cellulose acetate, a polymer that breaks down in the environment very slowly, some 4.5 trillion butts are discarded annually, making it the most littered item on the planet.

But the EU’s SUP directive is forcing producers to label the butts and packets to create awareness as opposed to an outright ban.

Activists want plastic butts to simply be outlawed — which won’t happen until 2027 when the list of banned SUPs will be updated.

In September 2020, anti-plastic campaigners collected 142,000 cigarette butts from streets across the Netherlands.

“Communication campaigns do not solve the issue,” said Karl Beerenfenger from By the Ocean we Unite, which co-organized the clean-up. “We must change the product itself. Cigarette filters only serve as a marketing tool to sell more cigarettes. We want to get rid of the plastic cigarette filter altogether.”

But so far there are no plans to ban butts.

Sustainable filters could be an interim solution, with the company Green Butts pitching its water dispersable filter to the EU Commission on social media, claiming its product biodegrades in days and is produced with sustainable natural fibers.

5. ‘Pandemic plastics’ yet to be included

The SUPs ban exempts medical-related plastics, including the masks and gloves that have become so widespread during the pandemic. In addition to the many types of packaging made from long-lasting SUPs for these pandemic response products, these materials have ended up as waste on both land and in marine environments, with potentially harmful impacts on ecosystems, according to the European Environment Agency (EEA).

“Imports of face masks into the EU more than doubled compared with business as usual before the pandemic,” said the EEA. The increase happened while EU production was also increasing.

With around 170,000 additional tons of these plastic-based face masks introduced into the EU during the first six months of the pandemic, calls are growing to find alternatives.

But so far, pandemic plastics are not addressed by the new SUP rules: “Notably, the directive on single-use plastics does not even apply to single-use plastic products used in the health sectors, such as single-use gloves, gowns and masks,” said Justine Maillot from Zero Waste Europe in a statement.