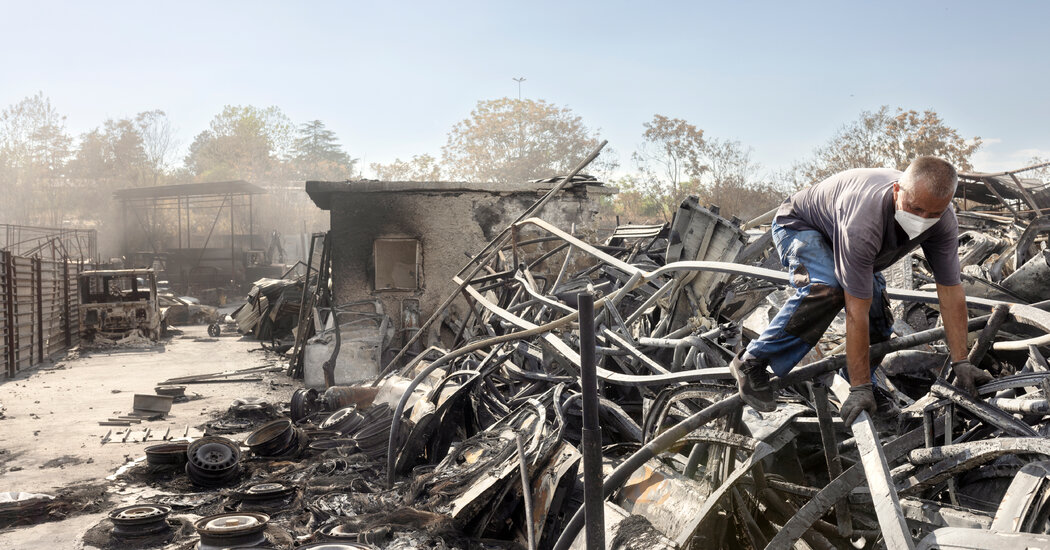 Could a solution to Rome’s perpetual trash crisis really be in sight? Mayor Roberto Gualtieri would like to think so.

ROME — For years now, nothing has symbolized the fall of Rome more than its garbage crisis. A trash menagerie of wild boars, violent sea gulls and rats convene to feast on the capital’s overflowing debris. Early this summer, a spate of suspicious blazes at garbage plants and scrapyards — literal dumpster fires — darkened the skies, choked the air, and raised the specter of arson and organized crime.

Then, when it seemed the stench of Rome’s garbage troubles could get no worse, a dispute over building a new incinerator for the city emerged as the stated reason for a political mutiny that brought down the national unity government of Prime Minister Mario Draghi in July.

On the day of the revolt, as he monitored the unfolding political drama from his office overlooking the Roman forum, Rome’s mayor, Roberto Gualtieri, seemed bemused by the role he and his city’s garbage problem had played in the government’s unexpected collapse. “Formally, the reason is me,” he said.

At least Mr. Gualtieri, a veteran of leftist politics, emerged from the wreckage with the authority to fast track the building of a roughly 600 million euro, or about $601 million, waste-to-energy plant for Rome, which he hopes will allow him to succeed where others had failed.

But garbage, and the degradation of Rome that it symbolizes, is a force not to be taken lightly. Even in an oft-sacked city that has seen it all over the centuries, where people have more recently grown accustomed to self-immolating buses, potholes as deep as water wells and myriad other indignities, the garbage — pervasive, pungent and unrelenting — has become the true metric of Rome’s decline.

Since Rome closed its sprawling Malagrotta landfill, among Europe’s largest, as an environmental disaster in 2013, trash has overwhelmed two mayors, including Mr. Gualtieri’s predecessor, Virginia Raggi of the Five Star Movement, the party that touched off the rebellion that brought down the national government.

In 2018, prosecutors sequestered the landfill — owned by a businessman dubbed “er monnezzaro,” or King of Garbage — for failing to contain its toxic spillage. No actual garbage has been dumped there for years, but its treatment plant was still being used to process up to 1,500 tons of garbage a day, before being shipped elsewhere.

That is, before it went up in flames this summer.

“An enormous plume, gray,” Luigi Palumbo, the court-appointed manager of the landfill, said as he recalled the toxic blaze and cloud that closed nearby preschools and summer camps and laced parts of central Rome with an acrid odor.

“It’s unknown where it started,” he said as he approached the plant, its concrete scorched and its melted aluminum panels hanging over the building like carpets hung out to dry.

He turned to a burned heap of garbage that had been inside the plant. It was filled with thousands of scorched and bulging plastic bags, melted plastic fruit crates, stray cloths and tires and cans. It, too, has now been sequestered as evidence — but of what, no one seems quite sure.

The Malagrotta blaze was not an isolated incident, but one of a rash of trash fires that broke out around the city this summer.

Mayor Gualtieri sought to sidestep the theory that “there is a conspiracy to stop me,” and his incinerator, by preserving a system in which myriad players, some of them shadowy, profited from Rome’s garbage crisis. But, he added, “of course you consider this possibility, how was it possible this really is happening exactly when we are trying to …” Then he stopped himself.

He noted a well-established connection between waste management and criminal enterprises. Experts had determined it was “not self-combustion,” he said. “So that was man made.”

And it has exacerbated Rome’s already noxious disposal problem.

Rome now has to ship its garbage at high cost to plants outside the city, in what Mr. Gualtieri said was a drain on its resources, a contributor to pollution and possibly a favor to the interests of underworld elements who benefit from Rome’s sanitation paralysis.

But while prosecutors continue to investigate the fires, the greatest challenge to cleaning up Rome may be the city itself.

Rome had “little sense of responsibility for its own garbage, because it’s always thought that public things, being public, belong to no one,” said Paola Ficco, an environmental lawyer who edits Rifiuti, or Waste, a journal about laws regarding garbage. “And we forget that, being public, it’s all of ours.”

In the meantime, she added, Rome was a mess, with high grass and garbage everywhere. “It’s a jungle,” she said. “Only boa constrictors are missing. Then we’ll have it all.”

Mr. Gualtieri, himself a Roman, acknowledged that his city bred unique character traits. Romans tended to have “behaviors that we find that are not good,” he said, when it came to throwing out the garbage.

Restaurants often loaded up bins reserved for the public. The public had a tendency to respond to the packed bins by balancing trash bags on top of them, like a vile Jenga game, or throwing garbage at their sides, forming archipelagos of uncollected trash that attracted all sorts of interesting fauna.

But even while the burned plant remains out of commission, the mayor is confident that the new incinerator, on which construction is set to begin next year, and the introduction of tougher fines for a variety of infractions would create a more civilized Roman context. Within it, he said, Romans would become “more sensible about doing their part” and give “the best and not the worst.”

As a former economy minister, he had personally helped procure billions of euros in European Union funds for Italy, with a significant chunk for Rome and other plants in the city’s waste plan. He spoke of an additional 1.4 billion euros from the Italian government to help prepare for pilgrims visiting the city and the Vatican during the 2025 Holy Year as if it were a done deal. And he already had success in attracting private investors to finance the new incinerator.

“Money is not the problem,” he said.

The mayor presented an organizational chart of AMA, a company that, among other things, manages collection of solid waste in Rome, and of which the city is the sole shareholder. He said that under previous administrations, AMA had changed chief executive officers five times in seven years, had become inflated with patronage jobs and had directed the majority of resources to garbage collection areas where it was not needed. Last winter, Rome paid bonuses to its workers just to show up for work during Christmas time.

“This is a joke,” he said. “This should be studied in university, what you should not do.” Overhauling AMA was a part of the mayor’s three-phase plan to clean up the city.

He said the city will have actually hired about 650 people by the end of the year to clean the streets while cracking down on an army of loafers. Officials had begun conducting thousands of checks on employees who perpetually present doctors’ notes certifying that they can only do desk work.

“You can see people heal,” the mayor said of the spot checks. “Miracles.”

In the second stage, within two years, the city would put new dumpsters on Rome’s streets, and a third phase would begin in 2025, toward the end of his five-year term, when the waste-to-energy incinerator is expected to come on line.

When he campaigned for the job, Mr. Gualtieri said he did not think such a plant would be necessary and that he would improve things by Christmas. He said that it was only when he took office that he understood the mind-boggling reality of Rome’s garbage. His critics, chief among them Five Star, which opposed the new incinerator on environmental grounds, consider him a hypocrite.

But, as summer vacation ends and the city fills back up with Romans and their trash, he argues the waste-to-energy incinerator will improve Rome’s environment and be profitable, an incentive he said for investors to get in on the ground floor.

All of Rome, he insisted, was on the brink of a new Golden Age.

“I can tell you why,” he said, anticipating the natural Roman skepticism and calling Rome an undervalued asset. “It has a lot of margin for improvements.”