BANDUNG, Indonesia — In a valley downstream from the source of the Citarum River, retired army general Doni Monardo approaches a magnolia tree planted in 2018 by President Joko Widodo to mark the start of one of the world’s most ambitious river cleanup operations.

“The tree planted by the president is growing nicely,” Doni said, as heavy fog lurked over the high ground.

A community nursery here in Kertasari subdistrict has been hard at work planting 47 different species of tree seedlings to help resuscitate a landscape that has fallen into grave condition.

The source of the Citarum River is found beneath the foothills of Mount Wayang in Indonesia’s West Java province. Around 11,000 families grow vegetables in these uplands for a few dollars a day, with much of the produce trucked down the valley to feed around 7 million people living in and around Bandung, the province’s largest city.

But the Citarum River, which at almost 300 kilometers (190 miles) from source to mouth is West Java’s longest river, is considered one of the world’s most polluted water courses. Vast structures of plastic waste and toxic chemicals have for decades choked what used to be a safe source of drinking water. 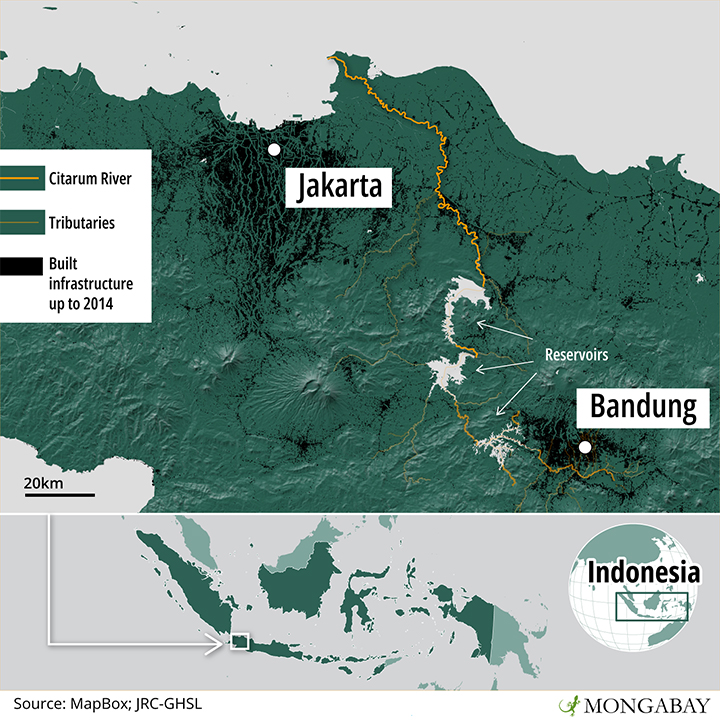 Concern over the Citarum is nothing new. Reforestation was identified as a key upriver measure for Prokasih, an early government cleanup program dating back to 1989. In 2005, the Asian Development Bank provisionally approved a $500 million, 15-year plan to rehabilitate the Citarum. It called for scores of individual interventions, spanning community empowerment to data collection, but much of the groundwork wasn’t completed.

In 2018, President Widodo initiated Citarum Harum (“Fragrant Citarum”), a fresh rehabilitation program to transform the troubled river into a source of potable water by 2025. As part of the scheme, the president ordered more than 7,000 soldiers to remove garbage clogging the waterway.

“Without community involvement and behavioral changes, how can this kind of ambition be realized?” Doni said before leaving the nursery.

Yusuf told Mongabay that drainage capacity at higher ground has been stretched owing to land clearing by farmers, itself a product of unclear zoning.

“Planting here has been difficult,” he said. “Not so much because the weather is a factor, but because of the human factor.”

Further downriver from Yusuf’s tree-planting sites, evidence of pollution and other impacts remain all too apparent.

Children no longer learn to swim in the river. Water testing has previously detected fecal coliform bacteria at levels 5,000 times the safe limit. In Ciwalengke, an area on the outskirts of Bandung, local people still see effluents from textile and garment factories flowing into tributaries. Water samples collected by Indonesia’s environment ministry have found heavy metals such as mercury, among other dangerous contaminants. And the decline in fish stocks has deprived fishers of an income and households of a key source of protein.

“The average fish catch can be up to 5 kilograms [11 pounds] a day,” said Kuswara, a local fisherman who spends much of his day wrestling with wide nets by the Batujajar Bridge in western Bandung.

But catch volume depends on water quality, and sometimes the 60-year-old returns home empty-handed. Various fish species are increasingly hard to find for fishers like Kuswara, who makes around 15,000 rupiah per kilo of fish, or about 46 U.S. cents per pound. Fish farmers in the Saguling and Cirata reservoirs often report losses from suspected metal contamination, presumed to originate from waste pipes concealed by factories.

Ramalis Sobandi, a researcher with the Bandung-based Tunas Nusa Foundation, said fieldwork in this section of the river has found elevated levels of child stunting. Children deprived of adequate nutrition in their early years run a higher risks of developing chronic conditions, such as diabetes and heart disease.

“In the rainy season [the river] is contaminated with wastewater and heavy metals,” Ramalis said. “There’s residue from fertilizer, from factories, and from households.”

A 2016 report by Greenpeace found almost 1,000 hectares (2,500 acres) of rice fields were contaminated by heavy metals.

Household waste is another major source of toxicity in the river. Around 200,000 families living in the Citarum watershed are estimated to dump their wastewater directly into the river. Anecdotal reports of septic tanks being flushed out into the river are common.

For Riki Waskito, the risks flowing down the Citarum through Majalaya subdistrict can be more immediate. On an afternoon toward the end of the rainy season, Riki observed fast-shifting weather patterns.

Riki, 45, has watched flash floods lay waste to property in this area of Bandung for decades.

“Flooding is a constant problem in the area where we live,” he said. “We have to adapt.”

The community group Riki belongs to draws on data published by an array of government bodies — the meteorology agency, the Bandung Institute of Technology’s climate lab, even the national aeronautics agency — to help communicate risks to local populations.

Estimates vary, but the amount of solid household waste generated in the city of Bandung is said to be around 1,500-1,600 tons per day. Only around two-thirds of this is subject to any waste-management processing, with the remainder dumped into the river.

In total, the government estimates that 1,500 tons of solid waste enter the Citarum River every day.

Other innovative community groups have coalesced to plug the large gaps in waste processing left by local governments. Sungai Watch, an NGO established in 2020 by three French siblings, has recruited around 1,000 young volunteers to install 100 trash-collecting barriers at various points of the Citarum.

Bijaksana said no country could realistically solve the issue of waste in less than 10 years.

“Actually, this waste problem is not a technology problem,” he said. “The formula already exists — the question is more about being brave and whether or not to seriously apply the formula. This is more about leadership and political will.”

Shandy heads the command center for the West Java government’s Citarum task force’s command center. He spends his days watching a mosaic of screens displaying indicators pouring in from sections of the river where Yusuf, Riki, Bijaksana and thousands of volunteers are working to breathe life back into the Citarum.

“The basic concept is to accelerate,” Harum said in an interview in March. “The most important thing is to make decisions.”

Civil servants in khaki shirts monitor water-quality indicators sent in from 15 detection sites, which they use to assess progress on the 13 initiatives mandated by the Citarum Harum program. These plans are set for completion in 2025, when the seven-year cycle of the president’s 2018 commitment expires. What happens next remains unclear.

Funding from the state budget to clean up the Citarum was cut from the original allocation in 2020 and 2021.

“If the environment is already damaged as in this case it’s very hard,” said Prima Mayaningtyas, the head of the West Java environmental office. “Not to mention the amount of funding that is required, which is vast.”

The 2018 executive fiat that established the Citarum Harum project made rehabilitation of the watershed the responsibility of the central government. In practice, the governor of West Java, Ridwan Kamil, shoulders much of the political responsibility for a project that is paramount to millions of the province’s 50 million population.

In an interview with Mongabay, the governor, who oversees the Citarum task force, said West Java residents will see improved water quality within two years as officials enforce industry compliance with waste standards.

“In addition, we are implementing communal livestock waste management, as well as tackling the behavior among people who often throw garbage and household waste directly into river bodies,” Ridwan said.

The governor said rehabilitation of West Java’s longest river had become a high political priority, adding that policymakers were applying greater focus more broadly on the impacts of climate change.

“In the early days the political will to improve environmental conditions was in the end eroded by political bargaining,” Ridwan said. “Especially [among] leaders who focused on economic growth and ignored sustainability.”

High in the hills of Mount Wayang, Yusuf was drenched with sweat as he inspected the growth of seedlings supplied by his grassroots organization. The group has supplied 3 million seedlings to the Citarum task force overseen by Governor Ridwan. Local residents were given the trees to plant for free, including 110,000 coffee seedlings.

“The concept is sincere,” Yusuf said. “The principle is that it is not how much is planted, but how much will grow.”