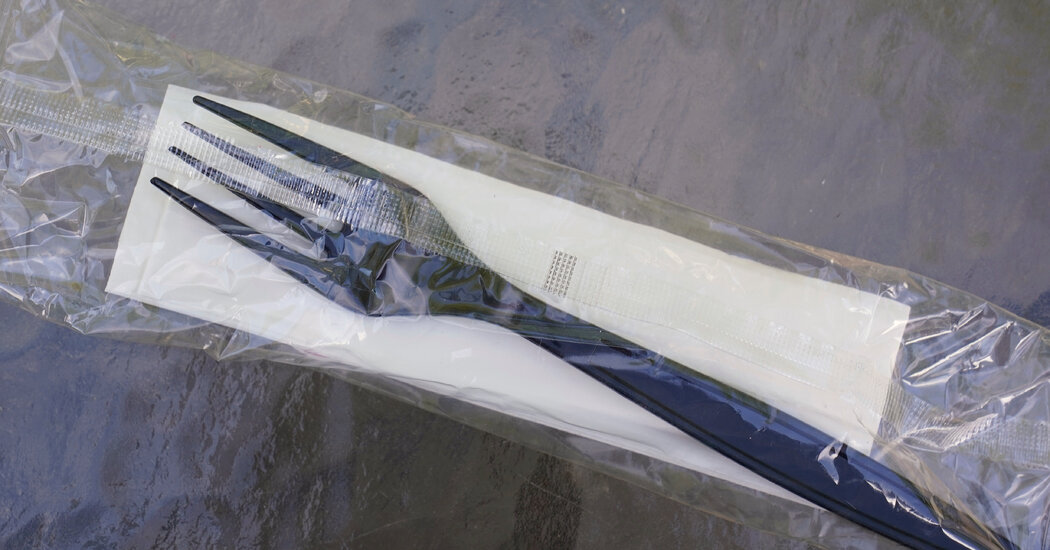 The landmark legislation also restricts single-use plastics. Because California’s economy is so big, experts say, the law could have far-reaching effects.

In one of the most ambitious statewide attempts to reduce dependence on plastics, California instituted a new requirement that makers of packaging pay for recycling and reduce or eliminate single-use plastic packaging.

The law, signed by California’s governor on Thursday, is the fourth of its kind to be passed by a state, though experts say it is the most significant because it goes further in requiring producers to both make less plastic and to ensure that all single-use products are recyclable or compostable. Last summer, Maine and Oregon passed the country’s first such requirements, known as producer-responsibility laws.

A key tenet of the laws: The costs of recycling infrastructure, recycling plants and collection and sorting facilities, will be shifted to packaging manufacturers and away from taxpayers, who currently foot the bill.

The California law requires that all forms of single-use packaging, including paper and metals, be recyclable or compostable by 2032. However, this is most significant when it comes to plastic products, which are more technologically challenging to recycle. In addition, it is tougher for people to figure out which plastics are recyclable and which aren’t.

Unlike in other states, California will require a 25 percent reduction across all plastic packaging sold in the state, covering a wide range of items, whether shampoo bottles, plastics utensils, bubble wrap or takeaway cups.

“We know that to solve our plastic pollution crisis, we need to make less plastic and reuse more of the plastic we do have,” said Anja Brandon, a policy analyst at the Ocean Conservancy, an environmental nonprofit group, and a contributor to the text of the bill. “This is the first bill in the country to tackle both issues.”

Recycling is important for environmental reasons as well as in the fight against climate change. There are concerns that the growing global market for plastics, which are made from fossil fuels, could support demand for oil, contributing to the release of greenhouse gas emissions precisely at a time when the world needs to wean itself from fossil fuels to avoid the worst consequences of global warming. By 2050, the plastics industry is expected to consume 20 percent of all oil produced.

According to one estimate by her team at the Ocean Conservancy, Ms. Brandon said that the new California law would eliminate 23 million tons of plastic in the next 10 years.

Under the state’s law, manufacturers would pay for recycling programs and will be charged fees based on the weight of packaging, the ease of recycling and whether products contain toxic substances, such as PFAS, a type of virtually indestructible chemicals that have been linked to increased risk of some cancers.

It follows other attempts in California to improve recycling. Last September, California became the first state to bar companies from using the “chasing arrows” symbol — the common symbol, three arrows forming a circle, often thought to mean that something is recyclable, although that’s not necessarily the case — unless they could prove that the material is in fact recyclable in most California communities.

In addition, the law requires plastics manufacturers to pay $5 billion into a fund over the next 10 years that would mitigate the effects of plastic pollution on the environment and human health, primarily in low-income communities.

“For far too long, plastic waste has been a growing burden for humans, animals, and the water, soil, and air we need to exist,” Ben Allen, a Democratic state senator and an author of the bill, said in a statement.

Logging. The Congo River has become a highway for sprawling fleets of logs. Crews live aboard these rafts for a sliver of profit from the dismantling of the Congo Basin rainforest, which is becoming increasingly vital as a defense against climate change as the Amazon is felled.

South Asia. India and other nations in the region, home to hundreds of millions of humanity’s most vulnerable, are on the front lines of climate change. As climatic extremes become the norm, it’s growing more difficult to address poverty, food security and health challenges.

Great Salt Lake. Local politicians and scientists are warning that climate change and rapid population growth are shrinking the lake, creating a bowl of toxic dust that could poison the air around Salt Lake City. But there are no easy solutions to avert that outcome.

Hurricane season. The National Oceanic and Atmospheric Administration expects an “above normal” Atlantic hurricane season this year. If that plays out, it would make 2022 the seventh consecutive year with an above-normal season.

California has the largest economy of any state, and is a major global economy as well. Because of its size, and given the increasingly national and global nature of supply chains, recycling analysts say that the law could have an effect on packaging used nationwide. “Manufacturers don’t make packaging for a single state,” said Dylan de Thomas, head of the policy team at The Recycling Partnership, a nonprofit focused on improving recycling systems. “They will make packaging recyclable elsewhere too, and you are going to have a stronger recycling system.”

Those tracking the bill were buoyed by the comparative buy-in from industry groups, which have historically resisted producer responsibility laws. In a statement, the American Chemistry Council described the law as “not perfect” but said it would work to eliminate plastic waste.

Over the past few years, a dozen states have introduced producer responsibility laws on plastic packaging. And a growing number of states and cities have introduced bans on single-use plastic bags or plastic foam products. The California legislation avoids outright bans, at least initially. Products like polystyrene face the prospect of being banned only if they don’t meet certain rates of recycling in the state.

Recycling advocates said that they hoped the law would lead to potential innovations such as refill stations for products like detergents or beverages. “We hope that producers have to take a step back and think, ‘Do we need to wrap our cucumbers in two to three layers of film?’” Ms. Brandon said.