‘SEABED FULL OF GARBAGE’:
Greenpeace members filled a tank with garbage that volunteers collected from a beach during a single day of beach cleanup in Keelung

Greenpeace members yesterday brought a truckload of marine trash to a rally outside the Legislative Yuan in Taipei as they urged government officials and lawmakers to approve a draft ocean conservation law without further delay.

The environmentalists set up a large display tank and filled it with garbage to illustrate the level of pollution at most of the nation’s beaches and nearshore waters.

“This is one truckload of marine trash picked up during a single day of beach cleanup activity last year at a ‘protected marine area’ near Keelung,” Greenpeace Taiwan “Project Ocean” director Tommy Chung (鍾孟勳) said. 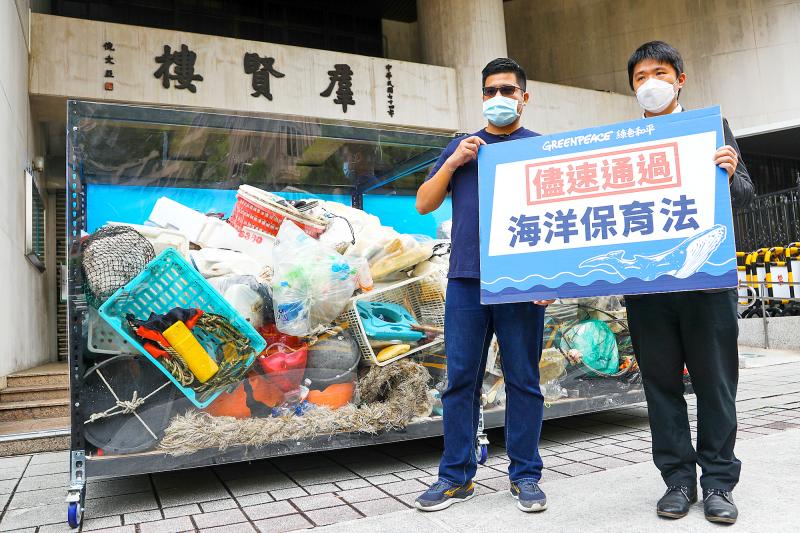 “We did not see any fish or signs of marine life” during offshore dives to collect debris, Chung said. “Only the seabed full of garbage.”

“Taiwan has clearly reached a crisis point in coastal pollution and the death of the marine environment,” Chung said.

Greenpeace has partnered with other civil society groups to press the government into enacting more comprehensive laws to protect the marine environment.

They have also collaborated with experts to write the articles of the draft ocean conservation law, which went through it first reading in the legislature two years ago, Chung said.

“However, the bill has been stalled in the Executive Yuan, as it needs to undergo full consultation by expert committees and public hearing,” he said.

“Deliberations have not progressed at the legislature’s Internal Administration Committee, whose approval is required for the bill to go through a second reading,” he added.

Chung and other group members urged lawmakers to spur the Executive Yuan into action and give priority to the bill on the committee’s agenda in the coming weeks.

This way, the bill could be expedited through its second and third readings, and enacted into law during this legislative session, they said.

“Our ocean is in crisis and the fish are dying out. Please, we must approve the ‘ocean conservation’ bill now,” Chung said.

They promised to expedite the bill’s deliberation and see it through its third reading in the legislature, Chen said.

Citing Greenpeace reports, she said that the populations of 20 fish species in Taiwan’s offshore areas have dwindled by 90 percent from 30 years ago, based on the amount of catch.

Overall catch has declined by more than 50 percent, which represents a monetary loss of NT$27.9 billion (US$945 million at current exchange rate), she said, citing government agency figures.

Comments will be moderated. Keep comments relevant to the article. Remarks containing abusive and obscene language, personal attacks of any kind or promotion will be removed and the user banned. Final decision will be at the discretion of the Taipei Times.