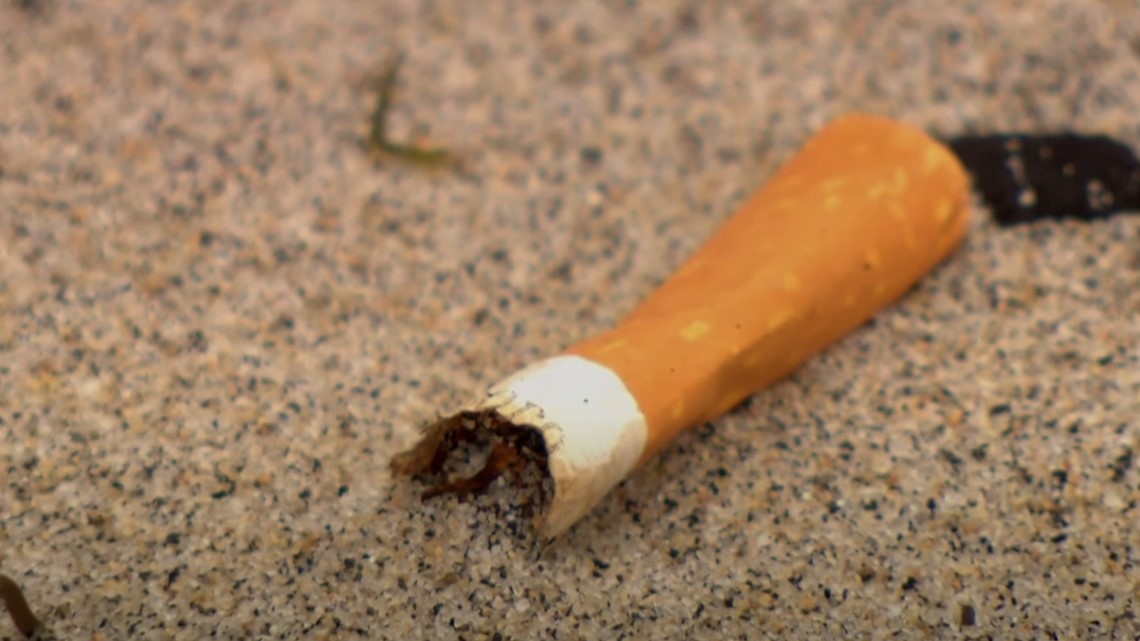 SAN DIEGO — Beach cleanups are common along our coastline, and the most reported pollution problem are cigarette butt filters. They are a costly health hazard for not just us, but the environment.

Travel from storm drains to beaches

Whether the filters are put out in the sand or make the journey inland from areas like Downtown San Diego through storm drains, they will also find a way onto our beaches. I took a stroll along the sands of Ocean Beach with Mitch Silverstein. He is with the San Diego Chapter of the Surfrider Foundation. It did not take long to find cigarettes butt, and I mean a lot of cigarette butt, pollution.

I asked Silverstein and Dr. Thomas Novotny, who was also present for this all too familiar show and tell, what do you say to people who believe “well I’m only putting out one cigarette butt, where’s the harm?”

“One, there’s six trillion cigarettes manufactured globally, you put one, the next guy puts one, the next million people put one, and what we find is that a third of all the beach litter picked up from the beaches is cigarette butts,” said Novotny.

Novotny is the Professor Emeritus at the San Diego State University School of Public Health. This environmental concern is echoed by many organizations including the National Oceanic and Atmospheric Administration, known as NOAA, citing cigarette butts as the number one marine pollution in the world.

Novotny refers to cigarettes as a teabag of toxins citing the seven thousand chemicals found in them, including 50 of which are capable of causing cancer. And to top it off, these filters, that have all those toxins locked in, are single use plastics. Don’t let the appearance of a paper lining fool you.

To better illustrate how microplastics get dispersed into our environment, Mitch Silverstein uses a piece of Styrofoam as an example.

Once broken down, but not gone, the microplastics associated with cigarette filters become imbedded in our environment and even us.

“It’s also a sponge for toxins. So, it soaks up toxins. Fish eat it and we eat that fish, and we get those toxins, and we get that plastic. So, we’re eating it,” said Silverstein.

When it comes to putting out this issue, Novotny advocates for an upstream way of preventing this top pollution. He wants legislation passed that would ban the sale of filter cigarettes, citing the filter itself has no health benefits.

“It is not just the environment, if we can reduce tobacco use in any way, even a small percentage we are going to improve the health of Californians, reduce the cost of healthcare, reduce the cost that is involved in cleaning up beaches and urban environments and just spoiling the natural environment that we have,” said Dr. Novotny.

Mitch Silverstein echoes this sentiment on the ban with involvement on a local and State level.

“We can try to blame litterbugs all we want, but at the end of the day, we need to hold the producers responsible and we need to prevent every single cigarette from having a plastic butt, where evidence is overwhelming that it’s hazardous waste and highly likely to end up in our environment,” said Silverstein.

Unfortunately, on a State level, a bill is introduced during every legislative session that never makes it out of the committee process. Mitch says pushing for this policy change is going to come down to the data, and we can help.

“We have a great tool, Surfrider — any individual can have an account and add to the data that we collect because we need to show policy makers the data. You know, not just come out and say, “hey, you know I feel like the ocean is being polluted”. We know it and we have the numbers to back it up.”