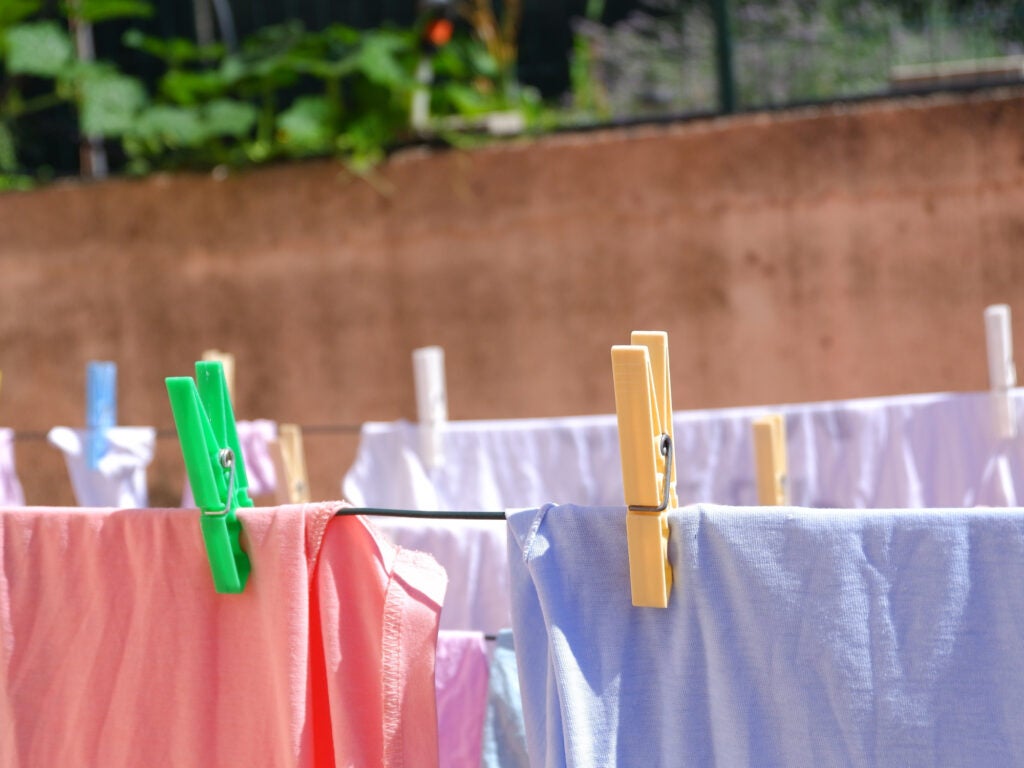 If there’s one thing every fitness enthusiast, athlete, and lover of the outdoors has an overabundance of, it’s synthetic apparel. After all, materials like polyester, nylon, and acrylics simply excel at wicking moisture, dry out quickly, and can really take a beating.

But all those synthetics are made of plastics. And when these fibers break or pill, they shed tiny threads that often end up in our soil and water supply, causing health and environmental problems. As careful as you may be, the No. 1 culprit behind all those loose particles is right inside your home: your washing machine.

Fortunately, there are easy ways to keep microplastics from polluting the planet every time you run a load.

Why should I care about microplastics?

As the name suggests, microplastics are small pieces of plastic or plastic fibers that are frequently invisible to the naked eye. As such, fighting to prevent their release is less sexy than advocating against plastic straws or bags—endeavours that are commonly accompanied by heart-wrenching images of turtles choked by trash. But microplastics are still an urgent threat to our environment, says marine biologist Alexis Jackson. And she would know: she has a Ph.D. in ecology and evolutionary biology and has extensively studied the plastics in our oceans as the ocean policy lead for the California chapter of the Nature Conservancy.

But unlike buying metal straws or collecting reusable shopping bags, the solution to this microscopic problem isn’t clear. For starters, microplastics are so, well, micro, that wastewater treatment plants usually can’t filter them out.

[Related: Reusable grocery bags aren’t as environmentally friendly as you might think]

When they slip through, they end up pretty much everywhere. They’ve even been detected in the arctic. And they’re more than just a nuisance: any animal that eats these minuscule plastic threads may end up with blocked digestive tracts, decreased energy, and less of an appetite, all of which can result in stunted growth and reduced reproductive abilities. Plus, microplastics have been shown to absorb harmful chemicals like heavy metals and pesticides, carrying those toxins into the bodies of plankton, fish, sea birds, and other wildlife.

From there, the dangerous chemicals can work their way up the food chain and show up in your seafood dinner, not to mention your tap water.

Unfortunately, we don’t yet have data on the potential long-term effects of microplastics on human health. But since we know they are harmful to animals (and plastic isn’t a recommended part of a healthy, balanced diet), Jackson points out that it’s safe to say we should probably avoid putting them in our bodies.

When it’s time to wash your leggings, basketball shorts, or moisture-wicking tanks, there are a few things you can do to keep microplastics out of the environment.

Start by separating your clothing items—not by color, but by material. Wash rough or coarse clothes like jeans separately from softer items like polyester T-shirts and fuzzy fleece sweaters. This way, you reduce the friction caused by rougher materials crashing into more delicate ones for 40 minutes. Less friction means your clothes won’t wear out as fast and the fibers will be less prone to premature breakage.

Then, make sure you’re using cold water instead of hot. Heat weakens fibers and makes them more likely to break; cold water will help them last longer. Next, run a short cycle instead of a normal or long one, which will limit the opportunity for fiber breakdown. While you’re at it, reduce the speed of the spin cycle if you can—this will reduce friction even further. One study showed that together, these methods reduced microfiber shedding by 30 percent.

While we’re on the subject of washer settings, avoid the delicate cycle. That may run contrary to your beliefs, but it uses more water than other washing modes to prevent friction—and a higher ratio of water to fabric actually increases fiber shedding.

[Related: Here’s why gym clothes smell so rank—and how to freshen them up]

Finally, skip the dryer altogether. We can’t emphasize this enough: heat can shorten the life of materials and make them more likely to break in the next load of laundry. Fortunately, synthetic clothing dries fast, so hang it outside or over your shower rod instead—you might even save money by not running your dryer so frequently.

Once your clothes are washed and dried, don’t go back to the washer for a while. Many items don’t need to be washed after every use, so put those shorts or that shirt back in the dresser for another wear or two if it doesn’t smell like wet dog after one use. If there’s just one dirty spot, wash it out by hand instead of starting a load.

There are also several tools you can use to reduce microfiber shedding. Guppyfriend makes a laundry bag specifically designed to capture broken fibers and microplastic waste, but also to prevent fiber breakdown in the first place by protecting clothing. Just place your synthetics inside, zip it shut, toss it in the washer, and pick out any and dispose of any microplastic lint that gets caught in the corners of the bag. Even standard laundry bags help reduce friction, so those are an option as well.

A separate lint filter that attaches to your washing machine’s discharge hose is another effective and endlessly reusable option, shown to reduce microplastics by up to 80 percent. But don’t spring for those laundry balls that are supposedly meant to catch microfibers in the wash: the beneficial results are comparatively minimal.

As for detergent, many popular brands contain plastic, including those handy pods, which break down into microplastic particles in the washing machine. But finding out which detergents are the culprits requires some digging. Learn how to find out if your detergent is really environmentally friendly before you restock, or consider making your own. Then take care of your synthetics, starting on laundry day.