In just 45 minutes, Reid Harlocker and his team collected 18 pounds of trash from the northern Pacific Ocean.

“It’s awful,” he said, seated in his Hayden home Friday morning. “The pollution, it’s there.”

Harlocker returned from his ocean voyage with Pangea Exploration on March 8. He and the crew spent a month in the northern Pacific Ocean and on the remote Palmyra Atoll. They observed the horrific Great Garbage Patch in the North Pacific Gyre, which is one of Earth’s systems of circular ocean currents formed by wind and forces created by Earth’s rotation.

“I realized I didn’t know as much as I thought I did about ocean trash,” Harlocker said. “I now know the situation isn’t nearly as bad in the Atlantic as it is in the north Pacific.”

But the Atlantic Ocean is catching up, he said.

Harlocker is passionate about effecting change surrounding plastics recycling. A semi-retired communications engineer, he’s determined to learn as much as possible and spread the word about what needs to be done.

“Let’s be real honest about this. Plastics pollution starts right here,” he said. “We don’t recycle our plastics here. Our plastics are mostly ending up in that landfill up there. They’re leaching carcinogens into the water table. That’s a fact.”

He said he’s screened along the St. Joe River “and pulled up all kinds of crap that’s up there.”

“There’s plastics that people discard and they’re getting washed down the river. Ultimately they’re ending in the ocean,” he said. “This is a real problem. We have to stop.”

He said a lot of the plastics used now didn’t exist in the 1970s.

“Now it’s here,” he said. “We don’t need this s—. We really don’t. It all goes down to corporate profits and greed. The oil companies do not want to recycle plastic; they want to sell the new plastic. We’re going to have to create incentives to do this.”

Because U.S. recycling was dependent on China for so many years, America’s domestic recycling infrastructure was never developed, Harlocker said.

“There was no economically efficient way to handle recycling when the market disappeared,” he said. “Without dedicated investors, recycling infrastructure won’t be sufficient.”

A landfill is “a waste of waste,” he said. “We need to be reusing that waste.”

He shared a few stats from Columbia University.

“According to the (Environmental Protection Agency), in 2018, there were 292 million tons of municipal solid waste generated by Americans. Only 94 million tons were recycled or composted.”

He said 66% of discarded paper or cardboard was recycled, 27% of glass and only 8% plastics.

“How do we deal with this? We have to develop a domestic market in the U.S. for recycled materials,” he said. “Part of the problem is that the oil companies are fighting against it. They’re paying off our congressmen as much as they can.

“Here’s where we start to make a change — we require municipalities, institutions and the federal government to use recycled materials,” Harlocker said. “When that starts, now there’s a market.”

He said legislation could force petrol chemical companies to commit to recycled materials for recycling plant investments. Recycling should not be an expense to taxpayers or municipalities, he said.

“It should be an expense to the producers,” he said. “That is exactly what they have done in Europe.”

Harlocker’s trip wasn’t all doom and gloom. He’s now a certified open-ocean sailor. He experienced monsoon-like rain and howling winds. He witnessed a rare sighting of a melon-headed whale pod.

He also had the pleasure of meeting inquisitive booby birds.

“One night we had five of them on the bow, all looking for a place to hang out for the night, not to mention there’s a lot of flying fish going over our boat,” he said.

Harlocker will continue to educate himself and others about the issue of plastic pollution. He plans to hold presentations in the community and rally people to join the cause.

“The pollution is heartbreaking,” he said. “There are so many things to do out there. We could all concentrate on doing something that’s good.” 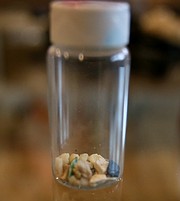 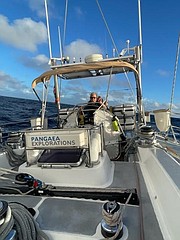