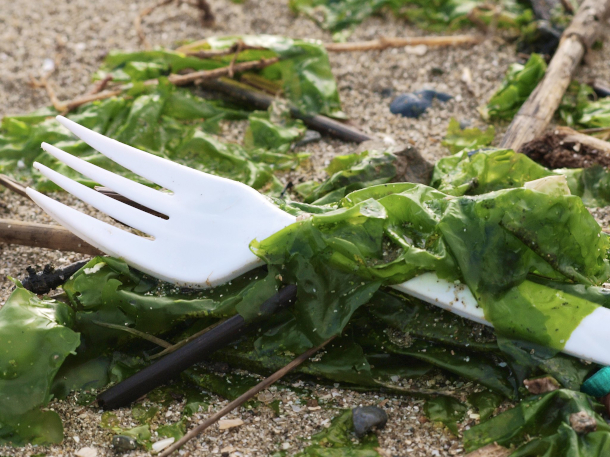 Plastic fork with seaweed. Single-use plastic utensils are difficult to recycle and can take up to 1,000 years to decompose. (Photo: Ingrid Taylar, Flickr, CC)

To help curb the plastic pollution crisis, the US Department of Interior will phase out single-use plastic products sold and distributed in national parks and other federal public lands it oversees. Christy Leavitt, Plastics Campaign Director at Oceana, joins Host Bobby Bascomb to talk about how the phase out could work and why it matters.

CURWOOD: From PRX and the Jennifer and Ted Stanley studios at the University of Massachusetts Boston, this is Living on Earth. I’m Steve Curwood,

BASCOMB: And I’m Bobby Bascomb. Roughly 40% of all plastic produced worldwide each year is thrown away after just one use.
And while things like plastic forks, straws and bags may be used for only a moment, they can stick around for up to a thousand years before they decompose.
Less than 6% of plastics in the US is recycled, meaning most plastic waste is incinerated, landfilled, or winds up in our oceans.
Seeking to curb such waste, Canada has announced a phaseout of the manufacture and import of common single-use plastic starting at the end of 2022 and culminating by the end of 2025.
Plastic is made from oil and gas, a major resource for Canada which is one of the world’s largest producers of oil.
Still, Prime Minister Trudeau says phasing out single-use plastic is a worthy aim, as the ban would eliminate close to 3 billion pounds of plastic waste over the next decade.

TRUDEAU: Plastic pollution is a global challenge. You’ve all heard the stories, and seen the photos. And to be honest, as a dad it’s tough trying to explain this to my kids. How do you explain dead whales washing up on beaches around the world, their stomachs jam-packed with plastic bags? Or albatross chicks photographed off the coast of Hawaii, their bodies filled to the brim with plastic they’ve mistaken for food? How do I tell them that against all odds, you’ll find plastic at the very deepest point of the Pacific Ocean, 36,000 feet down?

BASCOMB: The U.S. Interior Department has announced a goal to phase out single-use plastics sold and distributed in national parks and other public lands it oversees, but so far the Forest Service under the Agriculture Department has yet to follow suit.
The parks system alone had nearly 300 million visits last year and had to deal with some 70 million pounds of plastic waste.

For more, I’m joined now by Christy Leavitt, Plastics Campaign Director at Oceana. And by the way, we should disclose that Oceana is a supporter of Living on Earth through Sailors for the Sea. Welcome to Living on Earth, Christy!

LEAVITT: Thank you. It’s a pleasure to be here.

BASCOMB: So what exactly does this announcement entail? And how significant is it?

LEAVITT: This is a big announcement from the Department of Interior and the Biden administration. So on June 8th, on World Oceans Day, Interior Secretary Deb Haaland committed to phasing out single use plastic products in our national parks and other public lands overseen by the Department of Interior. So what she did was she issued a secretarial order that calls for the department to reduce the procurement, sale and distribution of single use plastic products and packaging on all Interior Department-managed lands and buildings by 2032.

BASCOMB: Now, the goal here is to phase out plastic by 2032, as you just mentioned, but that’s a full decade away. Why does it have to take so long? And what needs to happen between now and then?

LEAVITT: Yeah, well, we are hopeful that they will move quickly to phase out some of the worst, the most problematic, single-use plastics as quickly as possible. Our understanding is that it’s going to take them up to 10 years to deal with some of the specific concession contracts that they have. But we definitely know they’re interested in moving quickly, and we will be following up to make sure that they do move as quickly as possible.

BASCOMB: Well, what kind of impact does plastic waste currently have in our public lands and waters?

LEAVITT: Just to give you the scope of the problem, as we look at our oceans is that every year, 33 billion pounds of plastic enter the ocean. And to put that in perspective, that’s roughly equivalent to dumping two garbage trucks full of plastic into the ocean every minute. And it’s not just harming our oceans, but it’s also our climate and our health and our communities and our public lands. Basically, no place on earth is untouched by plastic. And we’re finding it in our national parks and other public lands. And it has a couple of impacts there. One impact is that nobody wants to look and see single use plastic water bottles or plastic straws or other plastic as they’re exploring the beautiful places like Yosemite or the Grand Canyon. And then it’s also harmful for the ecosystems there. So not only are there the big pieces of plastic, so the plastic bag, or the plastic water bottle, but it also, plastic breaks up into smaller and smaller pieces called microplastic, that then can get into the soil, can get into the air. That’s what we’re finding in rain; we’re even finding it in human blood and in our lungs, too. So we’re finding it everywhere, including in our national parks. 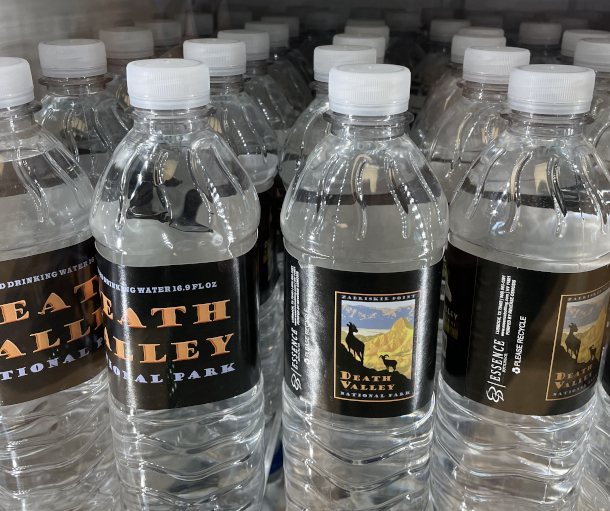 Water bottles for sale in Death Valley National Park, California. Sales of single-use products such as these are slated to end by 2032 in all Department of Interior facilities including in national parks. (Photo: Courtesy of Oceana)

BASCOMB: And to what degree is that potentially a threat to wildlife? You know, the very reason that we’re going to these national parks?

LEAVITT: It is a big problem for wildlife. So not only can wildlife get entangled, or ingest plastic, but the same thing is happening with microplastics, where they might be eating it, they might be, you know, breathing it in, those sorts of things, too. So it’s a problem for wildlife. And when we talk about our national parks, there’s more than 400 different national park units around the country. Some of them are the really big parks, like Grand Teton National Park, and some of them are smaller areas. But 88 of the National Parks are ocean and coastal parks. So they’ve got a direct impact on what’s happening in our oceans as well as our coastal Great Lakes too. So the plastic, if plastic is going out there, it’s gonna end up in our oceans. And Oceana did a survey a few years ago, we pulled together a report that looked specifically at what was happening with animals in US waters. And we found nearly 1800 animals — these were marine mammals, so dolphins, whales, as well as sea turtles — had been harmed by either ingesting or becoming entangled in plastic in US waters since 2009.

BASCOMB: And of course, those are just the ones that we know about and documented, you can be sure the number’s much, much higher.

LEAVITT: That is definitely true. Those are only the ones that people were able to see and observe. But there’s a lot more animals that are being impacted by plastic. 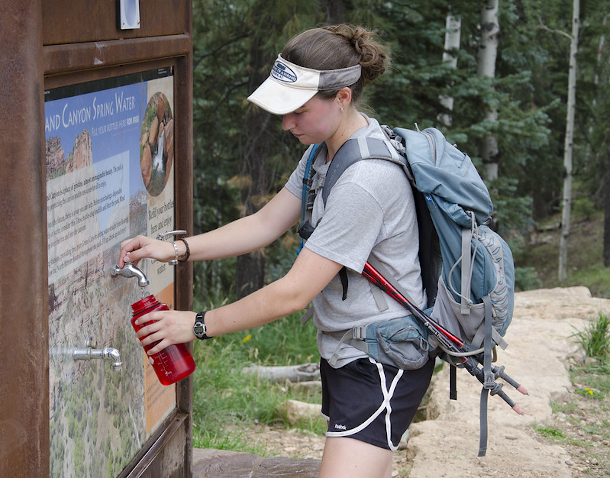 Installing additional water fountains, such as this one at Grand Canyon National Park, can help reduce the need for single-use plastic bottles by making it easier for visitors to refill reusable bottles. (Photo: Michael Quinn / NPS, Flickr, CC BY 2.0)

BASCOMB: Now, of course, plastic is made from fossil fuels, and the production of plastic and the plastic itself is a major source of greenhouse gas emissions that warm the planet. And as we know, climate change is one of the biggest threats to our national parks. To what extent, do you think that was maybe a factor in Interior Secretary Deb Haaland’s decision here to phase out plastics on our public lands?

LEAVITT: Yeah, our national parks are definitely faced with extraordinary adaptation challenges. So it’s a critical problem. And it’s definitely something that the Department of Interior and the Biden administration overall are looking at solutions to the climate crisis. As you mentioned, plastics have a big impact on climate. Almost all plastic is created from fossil fuels. So throughout its entire existence, plastic is creating climate changing greenhouse gases, so it’s extracted from, whether it’s from oil and gas, that extraction creates greenhouse gases; then the production of plastic creates more; they’re transported; they then break down in landfills or they’re incinerated or burned. So throughout its whole life, that plastic is creating more and more greenhouse gases. And I don’t think most people think of that plastic bottle or that plastic bag as coming from fossil fuels, but it is. And in fact, if plastic was a country, it would be the fifth largest emitter of greenhouse gases in the world.

BASCOMB: So how will phasing out single use plastic and the national parks and public lands actually work? What might a visitor see that might be different? 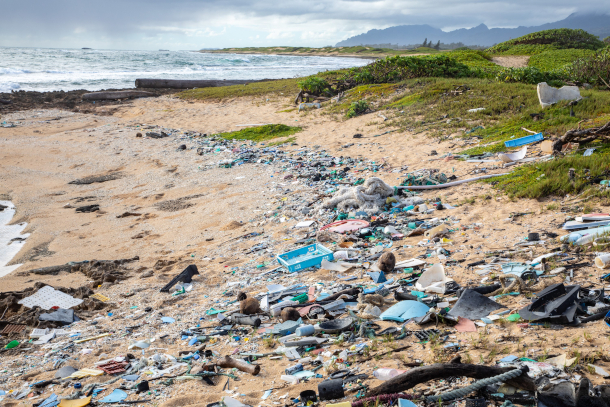 According to Christy Leavitt, every year around 33 billion pounds of plastic enter the oceans worldwide. That’s about two garbage trucks full of plastic every minute. (Photo: Courtesy of Oceana)

LEAVITT: I think some of the things that visitors will see at national parks will be more refillable water stations. So rather than buying a plastic water bottle, there’ll be stations at all of our national parks and other Department of Interior sites where you can go and refill your reusable water bottle. There’ll also be inexpensive water bottles for sale, so if you didn’t bring a water bottle, you’ll be able to purchase one right there. And you could use it over again and again. There’s already some of that happening at national parks and this will expand it even more. There are a lot of national parks, you can buy food, whether lunch or for dinner. Some of those are cafeteria style. Some of those are restaurant style. And they can move to reusable plates and dishes and cups and utensils. So they’ll need to create systems to be able to wash all those dishes. But it will be able to make sure that we’re not using single use plastic products in those places.

BASCOMB: Now, from what I understand many of the gift shops and food vendors in the national parks are actually concessionaires who contract with the National Park Service. So how might this affect them?

LEAVITT: Yes, that is definitely the case where a lot of the restaurants or gift shops are being run by concessionaires. And so they will need to make these changes, they’ll need to get rid of unnecessary single use plastic products, whether it’s in Yosemite or a National Seashore or another wildlife refuge.

BASCOMB: Christy, what kind of public support or, for that matter, pushback have you seen for this plan to phase out single use plastic in the parks?

BASCOMB: Christy Leavitt directs the plastics campaign at Oceana. Christy, thank you so much for your time today.

LEAVITT: Thank you. It’s a pleasure.