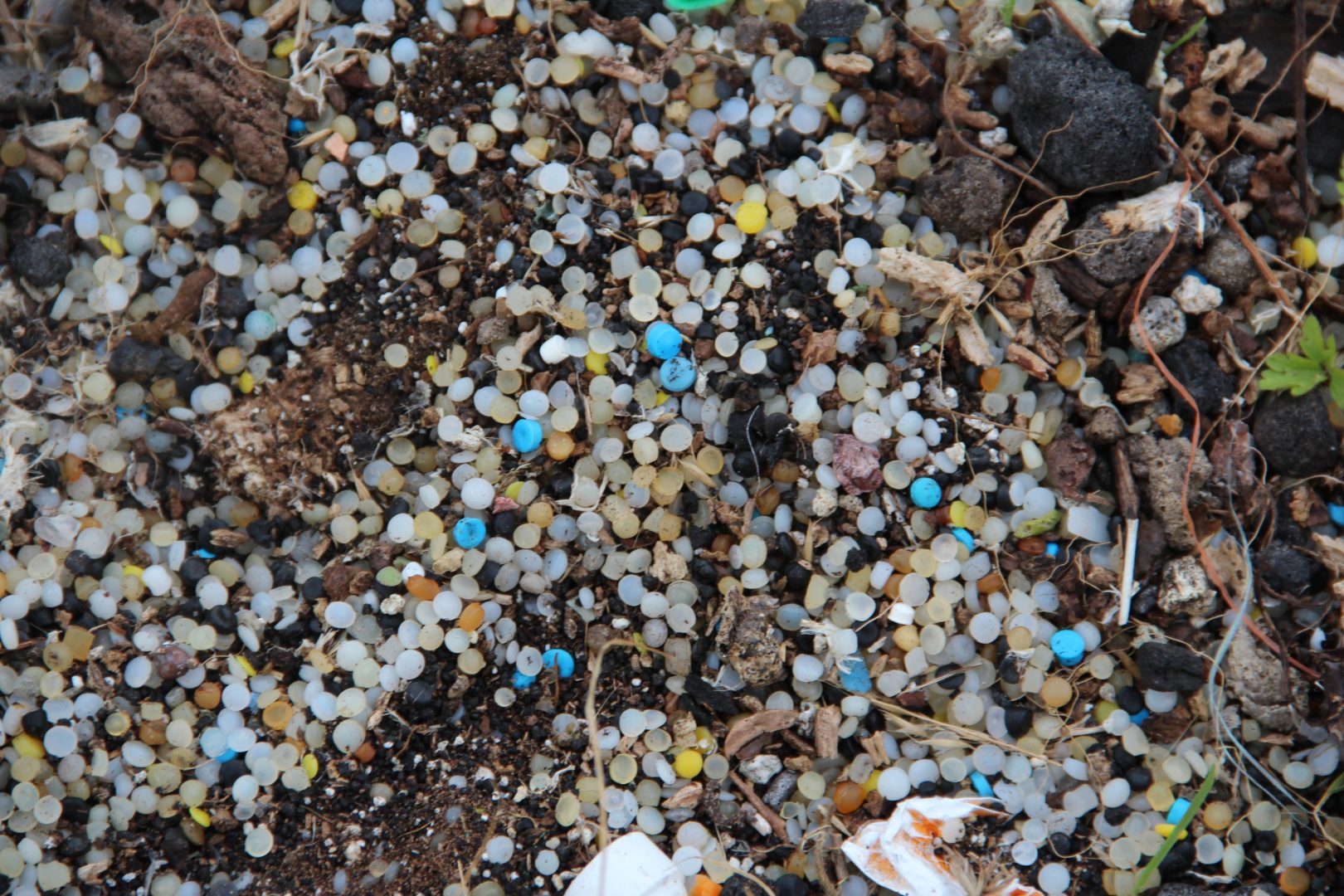 Nurdles on Ferrycraigs Beach on the Firth of Forth, Scotland. Environmentalists fear nurdle pollution in Pennsylvania will increase with Shell’s new ethane cracker in southwestern Pa.

Scientists have recently become aware that tiny fragments of plastic waste are almost everywhere, from the highest and lowest points on the earth’s surface to beer, tap water, living lung tissue and even human fetuses—all the result of the ubiquitous manufacturing of the material and a failure to seek out alternatives.

Now comes evidence that so-called microplastics pervade the cleanest waterways in Pennsylvania—those designated by the state as having the highest environmental quality.

A newly released study by the nonprofit PennEnvironment found that of the 50 streams studied from the fall of 2021 to the spring of 2022, all contained microplastics. The most common kind, found in every water sample, were fibers such as those from synthetic fleece and fishing line.

Among the contaminated streams are Big Fill Run in Blair and Centre counties, where all four kinds of microplastic were found; Sacony Creek in Berks County, which contained three types; and Hickory Run in Carbon County, which also had three kinds. All 50 waterways that were tested are classified by Pennsylvania’s Department of Environmental Protection as “exceptional value,” “high quality” or Class A trout streams. 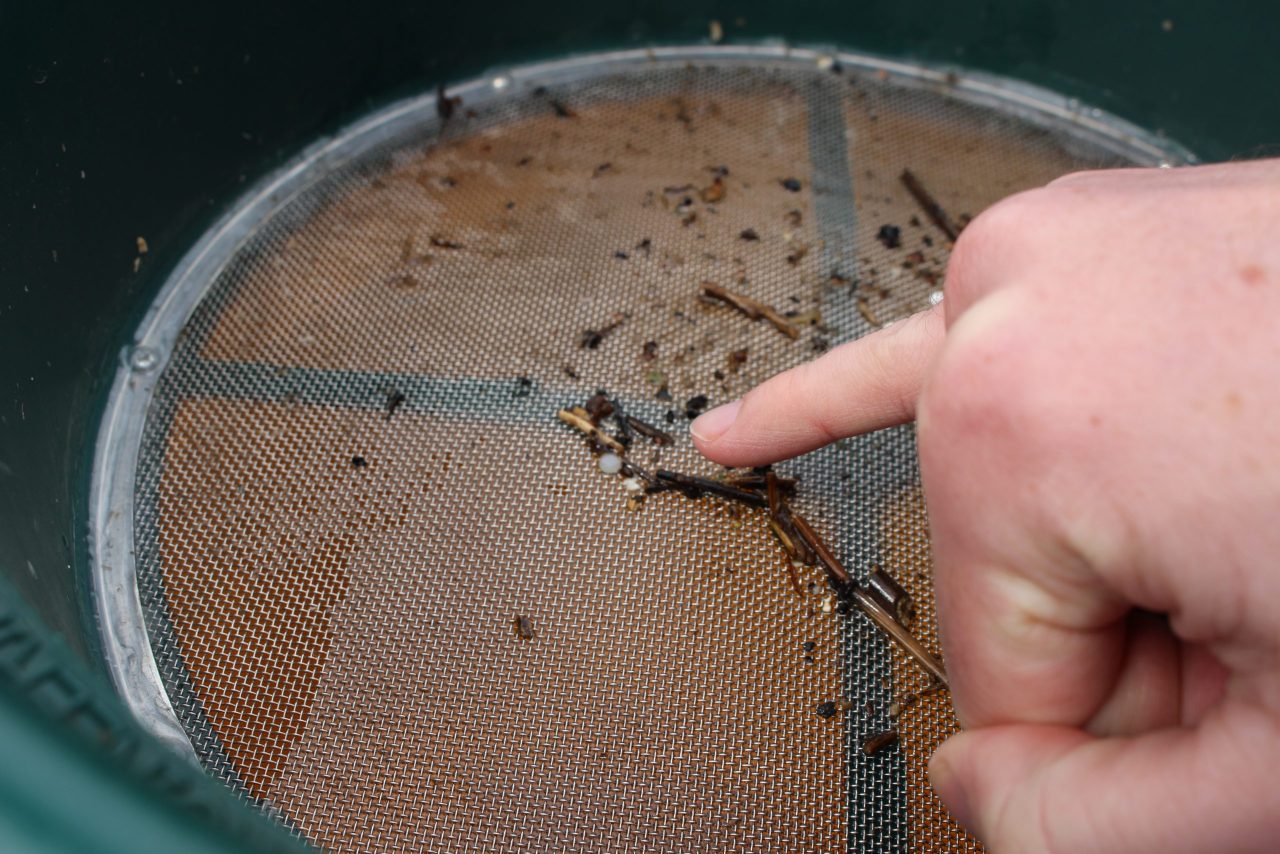 James Cato, Mountain Watershed Association, sifts through the debris and finds a nurdle in waters near Shell’s ethane cracker in Beaver County.

Samplers dispatched by PennEnvironment filled six glass quart jars from streams at each of the 50 sites. Where possible, the water was taken from streams that were at least two feet deep to avoid collecting sediment. The samplers were instructed not to wear fleece or other synthetic clothes whose fibers might contaminate the samples.

PennEnvironment focused its research on those 50 streams, “considered among the cleanest and of the highest ecological value” in Pennsylvania, in the hope that the discovery of ubiquitous plastic pollution in those waterways will move federal and state lawmakers and municipalities to take concrete action.

“It’s clear that the scope of plastic pollution in Pennsylvania extends far beyond what was previously thought,” the report said. “These are the cleanest and best protected waterways in the Commonwealth. And while many of the waterways sampled had little to no visual litter at the point of access, our samples found that Pennsylvania’s most pristine waterways continue to be contaminated with plastic pollution.”

The plastic waste in U.S. waterways comes from a broad variety of sources, the report notes. Some of it originates in plastic trash like cups, plates or forks that are dumped by users and break down into small scraps that persist in the environment. Landfills may leak plastic waste into the environment in a liquid form or through air emissions, and the burning of plastic waste can create microplastic pollution in the air.

Another common source of microplastic pollution is “nurdles,” tiny polyethylene pellets made by petrochemical manufacturers as a feedstock for plastics. Pennsylvania environmentalists fear that “nurdle” pollution in the western part of the state will worsen with the imminent opening of a massive plant in Beaver County in western Pennsylvania where the oil giant Shell will convert ethane from the state’s rich natural gas reserves into pellets for use by plastic manufacturers. 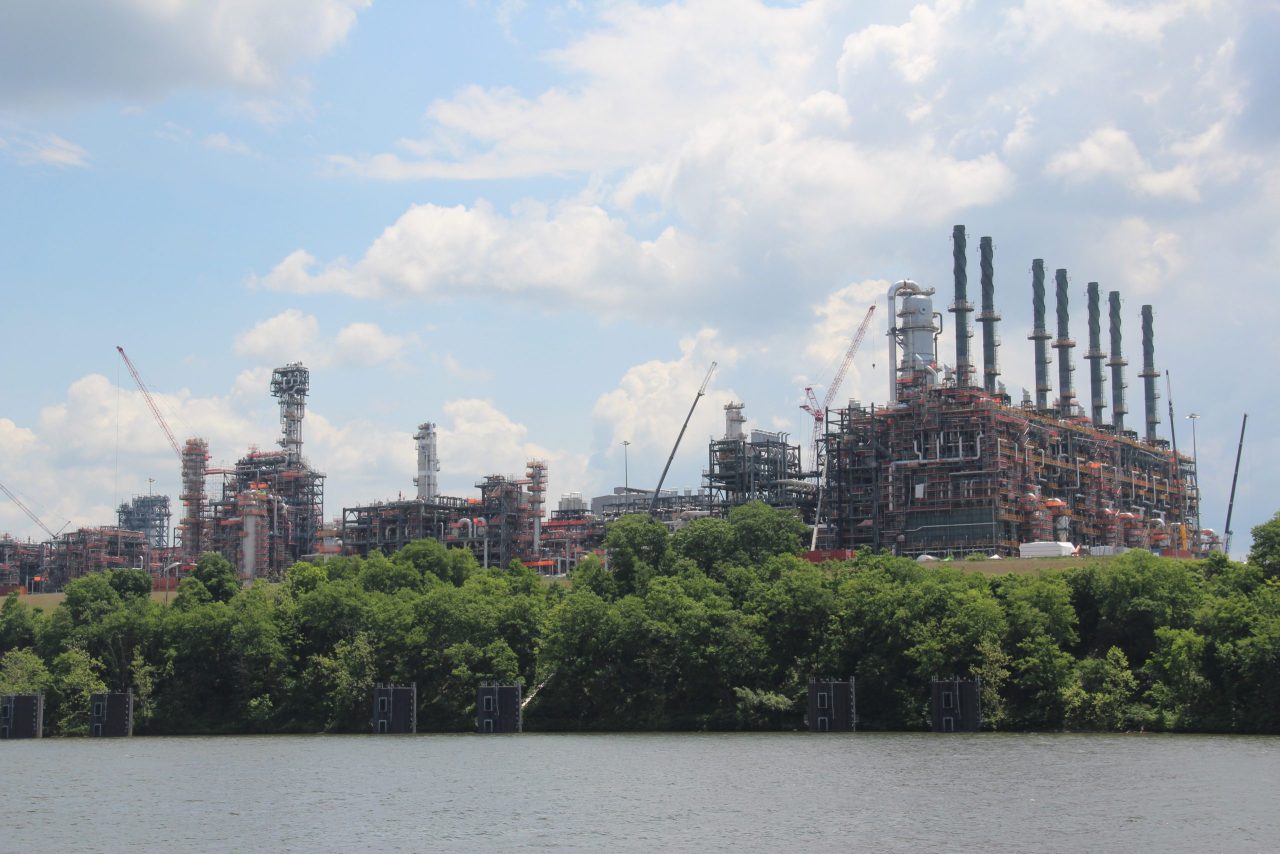 The Shell ethane cracker as it nears completion in June 2022.

Synthetic fibers from clothing find their way into streams when they are separated from garments in washing machines and then discharged by wastewater plants that are not equipped to remove all of the fragments, the report said.

Ubiquitous plastic waste also invades the human body, the report noted. It cites estimates that people ingest an average of five grams of plastic per week, about the weight of a credit card. Then the material lodges in the body and is linked to endocrine disruption, hormonal effects and reproductive disorders.

For wildlife, microplastics can cause malnutrition or even starvation when animals eat the fragments, thinking they are food, and fail to obtain the nutrition they need. Wild creatures are also susceptible to toxic chemicals, such as PCBs, that attach themselves to the plastic fragments.

The report’s findings underline earlier surveys detailing the pervasive nature of microplastic pollution in waterways. In August, the Delaware River Basin Commission, an interstate water regulator, said it had found 17 types of plastic waste at all 15 sites it sampled along the river from 2019 to 2021 between Trenton, New Jersey, and the Chesapeake & Delaware Canal.

An investigation by the U.S. Geological Survey into microplastics in the Delaware River between Burlington, New Jersey, and Callicoon, New York, found fragments in 100 percent of the water and sediment sampled and in 94 percent of the fish.

The report points out that municipalities can make a difference by passing ordinances like bans on single-use plastic shopping bags. But it noted that only 12 Pennsylvania cities, representing about 16 percent of the state’s population, had banned such bags as of October, and that cities had been unable to impose the bans until December 2021 because of a state law pre-empting local action on the issue.

That law was allowed to expire after a lawsuit was filed by five municipalities seeking to allow towns across the state to pass their own bans, said the report’s author, Faran Savitz. As a result, eight cities have imposed plastic-bag bans this year, making it harder for any lawmaker to reintroduce a new pre-emption law and moving Pennsylvania closer to a statewide ban, he said.

In the 12 cities that have banned plastic bags, not all of the prohibitions have been enforced, and not all the ordinances have the same provisions. But Savitz estimates that with 100 percent compliance, the bans would reduce plastic bag consumption by 766 million bags a year, or 4,200 tons of waste.

The report urged state lawmakers to block the return of a pre-emption law, arguing that municipalities, which are mostly responsible for finding ways of dealing with plastic waste, should be allowed to set their own rules.

“Nothing society uses for a few minutes should be able to pollute our environment for hundreds of years,” the report said. “Congress, Pennsylvania state officials, and municipalities should pass laws that phase out unnecessary single-use plastics such as polystyrene food service products, single-use plastic bags and plastic utensils.”

To reduce plastic production, the report argues, the state should also end tax breaks for petrochemical manufacturers, like the incentives provided for the new Shell plant near Pittsburgh. That facility, which cost at least $6 billion to build, was lured to Pennsylvania with $1.65 billion in tax breaks provided by the administration of Tom Corbett, the state’s Republican former governor.

Savitz acknowledges that pressure for an end to state tax breaks for the natural gas industry and the manufacturing of plastic byproducts has already been proved fruitless, starting with approval of the subsidy for Shell and, later, HB 1059, a bill that would provide an estimated $3.6 billion in tax breaks over the next 23 years for natural gas production and the creation of a natural gas-fueled “blue hydrogen” production hub in western Pennsylvania. The measure awaits the signature of Gov. Tom Wolf, a Democrat.

“We know that these companies will continue to find ways to put their fingers on the scale, make politicians pick winners and losers in the marketplace to make their products cheaper to produce and sell, and keep our addiction going on plastics,” Savitz said.

Citing its findings, PennEnvironment advocates the creation of green infrastructure such as rain gardens and porous pavements, which would allow rain to soak naturally into the ground rather than run off streets and parking lots into rivers and creeks during storms. Reducing the runoff will cut the amount of toxic plastic flowing into waterways, the report said.

PennEnvironment also called on lawmakers to update Act 101, a 1988 state recycling law that does not cover many materials, including some plastics, that have emerged as an environmental menace.

Jeff Tittel, former director of the New Jersey Sierra Club, said that while states like New Jersey and New York have begun to address the microplastics problem through measures like banning single-use plastic bags and Styrofoam containers, neighboring Pennsylvania is lagging in that effort—especially in rural areas where pristine streams get no protection because there are no local laws curbing plastic use.

“Even though we’ve got a long way to go, we’ve made some steps,” Tittel said of New Jersey. “Pennsylvania has made almost none. You have a few towns that are trying to deal with the issue, but it’s a statewide issue, and nothing is getting done.”

He argues that Pennsylvania’s long-standing promotion of the natural gas industry—by Republican lawmakers who control the legislature and successive governors from both parties— is aggravating its microplastics plastics problem.

“You see the promotion in Pennsylvania not only of fracking, but also taking the ethane and turning it into plastic bags,” Tittel said. “They are trying to develop an industry that is destroying their own waterways and polluting their own people.”

Savitz of PennEnvironment, meanwhile, calls for simply ending the use of disposable plastics and switching to reusable and easily available alternatives.

“Some of these products like bags, bottles or utensils are used once, for just a few minutes, and then thrown away,” Savitz said. “The problem is, there is no ‘away’: In a landfill, an incinerator or as litter, these products will be breaking down into microplastics and harming our environment.”