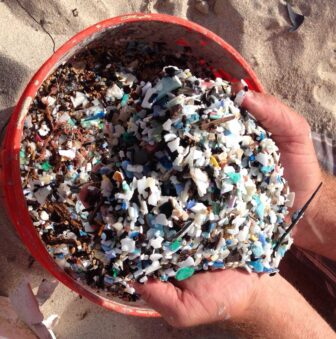 As plastic litter degrades in the sun, it breaks down into tiny pieces that are then consumed by the wildlife. Image: NOAA

Microplastics are pieces of plastic smaller than five millimeters, about the width of an eraser, according to the National Oceanic and Atmospheric Administration. They break down from larger pieces  or they are made that size for a specific purpose such as microbeads used in hygiene products. They are a common form of pollutant and can harm wildlife.

Fish are extremely susceptible to changes in their environment and food, said Dong-Fang Deng, a nutritionist and one of the lead researchers. Each ingredient can be a potential stressor that can jeopardize the health and quality of the fish.

Yellow perch are an extremely popular food fish and ecologically important to the Great Lakes, the study said. In recent years,  a decline in their population has driven interest in commercial yellow perch farming. Plastics used on fish farms in holding tanks, pipes, aeration lines and packing bags are potential sources of microplastic contamination of fish, the study said.

Most farmed fish rely on fishmeal for protein, Deng said. This meal is usually made from small fish caught in the ocean, another route of contamination.

“If the fish used for the fishmeal are from water polluted with plastics, it becomes a pathway for the microplastics to enter the feed of the perch,” Deng said. There are other pathways, such as the PVC piping in the aquaculture system, but this study focused on the effects of microplastics in the feed.

Unlike other pollutants, microplastics eventually pass through the digestive tract of the fish. While the researchers did not find any microplastic buildup in the fish’s body, the plastic caused a lower protein content in their muscles. The researchers theorized that this was because the fish spent more energy and nutrients to remove the plastic from their systems.

“So even though you don’t directly see the harm, there are long-term impacts to the nutritional quality of the fish,” Deng said.

“People shouldn’t be worried about eating fish because of microplastics,” Deng said. “We did not find any microplastic buildup in the fish muscle.”

Deng said that the study was relatively short and they fed the perch high levels of plastic. While this may not occur in a natural environment, similar results are produced by the fish being exposed to smaller amounts of microplastics in the water every day for years, she said.

“Even if we are able to decrease, or even eliminate plastic from polluting our water, the damage is already done and the impact will be long-lasting,” said Osvaldo Jhonatan Sepulveda Villet, an assistant professor at the School of Freshwater Sciences at the University of Wisconsin Milwaukee.

“There’s really no organism out there that readily degrades plastics,” Villet said. Even if it passes through the fish, the microplastics are still in the environment.

It’s nearly impossible to prevent plastic from entering the environment. Once it is in the water, the plastics easily end up in the fish’s environment and food, Villet said.

Villet said that it is possible to reduce the amount of plastic in the fish’s food.

“Fishmeal is an expensive and not very sustainable ingredient in fish food,” Villet said. “It doesn’t make a lot of sense to take fish out of the ocean and grind them up just to feed fish on a farm. If we can reduce the amount of fishmeal in the feed, there will be less plastic entering the farmed fish.”

While wild-caught fish sounds appealing, Deng said that farmed fish has the potential to be better for the consumer as the farmer has more control.

This study resonates with the larger issue of pollution and safe food options.

“It’s sad to say, but this will not be the last time that we hear about microplastics in fish, as it is becoming an increasing problem with our food,” Villet said. “But I do feel optimistic that we can figure out ways to resolve this issue.”

“It takes everybody, whether they’re scientists or everyday people to make wise decisions about how to consume food,” Villet said.