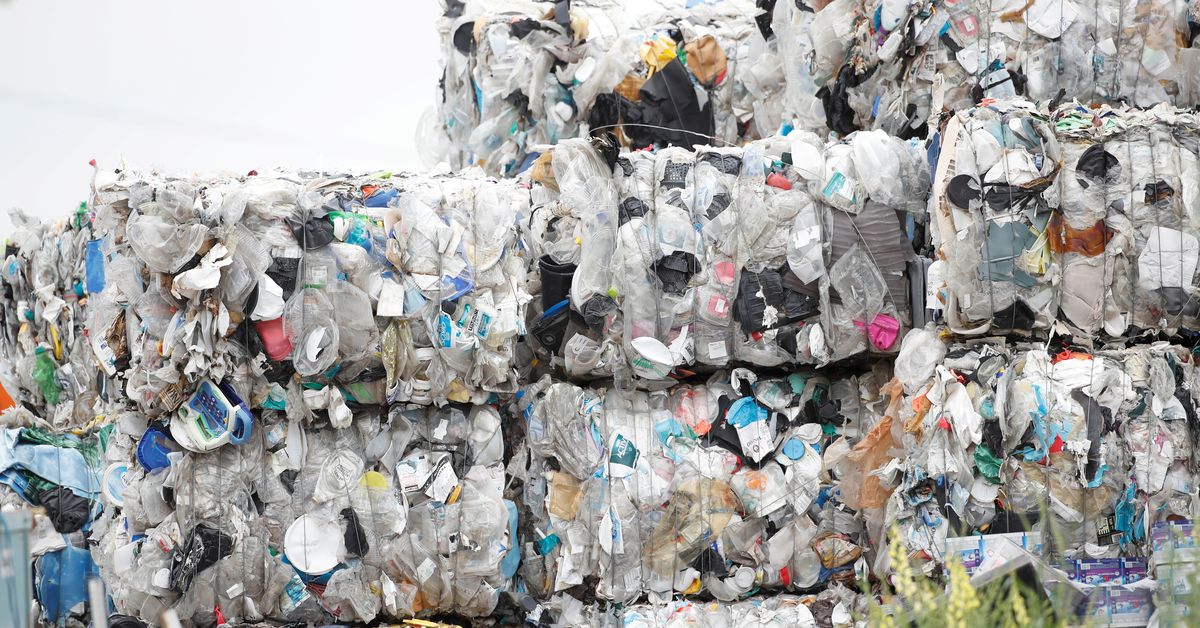 Bales of hard-to-recycle plastic waste are seen piled up at Renewlogy Technologies in Salt Lake City, Utah, U.S., on May 17, 2021. REUTERS/George Frey

WASHINGTON, Sept 29 (Reuters) – U.S. congressional Democrats are considering including the first federal fee to tackle plastic pollution in the multitrillion-dollar reconciliation bill, a proposal that is drawing opposition from the plastics and petrochemical industry.

Senator Sheldon Whitehouse and Representative Tom Suozzi are in talks with other Democrats to include their REDUCE Act as a source of revenue in the reconciliation bill. It would impose a 20-cent-per-pound fee on virgin – or new – plastic for single-use products such as plastic bags and beverage containers.

The proposal is among a slew of money raisers being considered by the White House and Democrats to pay for a package that includes provisions aimed at tackling climate change and expanding the public safety net. The measure, which Democrats aim to pass without Republican support, is a pillar of President Joe Biden’s domestic agenda.

White House officials declined to comment. But two sources familiar with the Biden administration’s thinking said it is reluctant to back the plastics fee because it could drive up costs for consumers.

More than 90% of plastic produced gets dumped or incinerated because there is no cheap way to repurpose it, according to a 2017 study by researchers from UC Santa Barbara, the University of Georgia and Woods Hole published in the journal Science Advances.

The REDUCE Act would compel plastic producers to use more recycled content and direct revenue toward a fund to support recycling and address plastic marine debris and other pollution.

“That pollution chokes our oceans, hastens climate change, and threatens Americans’ well-being, and it’s the plastics industry that should cover the cost of the damage,” Whitehouse said.

The American Chemistry Council (ACC), which represents some of the largest plastics and petrochemical companies, launched an ad campaign this month opposing the prospective fee, saying the measure would raise the cost of consumer goods.

ACC spokesman Matthew Kastner said the group has also been lobbying lawmakers to reject the idea and is “beginning to engage the White House.”